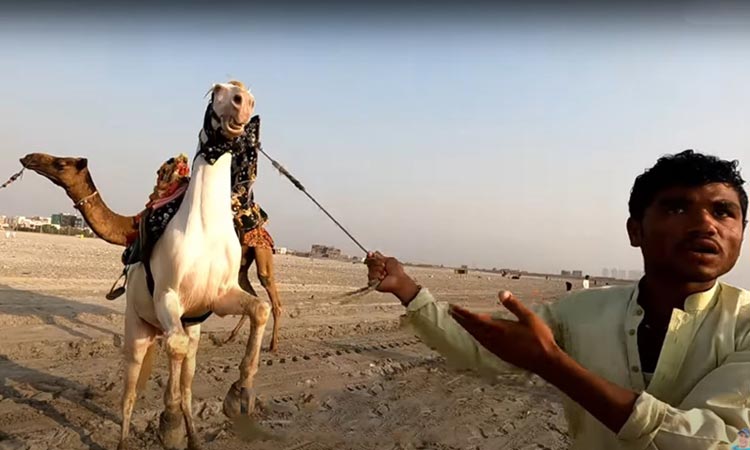 Darakhshan police on Saturday detained three horsemen on allegations of misbehaving with and trying to defraud a YouTube vlogger from Scotland, Dale Philip, at Karachi’s Seaview beach.

South SSP Rai Ijaz Ahmed said that the horsemen were taken into custody after Philip uploaded a video of the incident on his YouTube and also shared it on Twitter. “My first real negative experience in Karachi. 99pc of people there are good but eventually I had to run into some criminals,” tweeted Philip along with the video.

The video starts with Philip and the horsemen agreeing on a ride to Chunky Munky, an amusement park located alongside the beach, for Rs200. However, when the ride starts, Philip observes that they were heading in the opposite direction. While on the horse, one of the horsemen, who is riding along Philip, communicates to him that it was a “long ride” to Chunky Munky and avoids giving a definite answer when Philip asks him how much it would cost.

When Philip reminds him that they had agreed on Rs200 for a ride, the horsemen eventually tells him that it will take 20 trips to reach Chunky Munky. Philip is then seen repeatedly asking the horseman to stop so that he can get off the horse but is ignored. Upon eventually returning to the spot from where they had started, the horseman demands that Philip pays them Rs 5,000.

Philip, however, refuses to pay the amount. SSP Ijaz confirmed these details and said the detained horsemen were identified as Jehanzeb, Maqsood and Ahsanullah.

This is the second incident of horsemen attempting to defraud foreigners at Seaview beach reported in recent days, police said. Earlier this month, an Australian vlogger, Luke Damant, uploaded a video on his YouTube in which a horseman were seen trying to defraud him in a similar manner as in Philip’s case. The horseman who had tried to defraud Damant was identified as Zubair and subsequently arrested, police said. SSP Ijaz said that complainants in both the cases appeared reluctant to initiate legal action against the suspects. He said both the tourist had appreciated police for detaining the fraudsters and Philip had even thanked police in one of his tweets. Philip posted a photo of one of the horsemen behind bars and said, “He tried to earn a living by cheating people, but now he’s living behind metal bars thanks to Karachi Police.”

“Hopefully, he learns there’s no need to cheat foreign tourists. Most will give extra payment if they were shown a good experience and treated in an honest way,” he added. The SSP said suspects in both the cases had later apologised.

He added that in light of such incidents, the police had decided to conduct a survey of horsemen at Seaview beach. The survey, he said, would be jointly conducted by police, Cantonment Board of Clifton and the South deputy commissioner of South. After the survey, a code of conduct would jointly be chalked out and in case of violation of the code, legal action would be taken against the horsemen on charges of cheating people and “subjecting them to undesirable treatment” at the beach, he added.