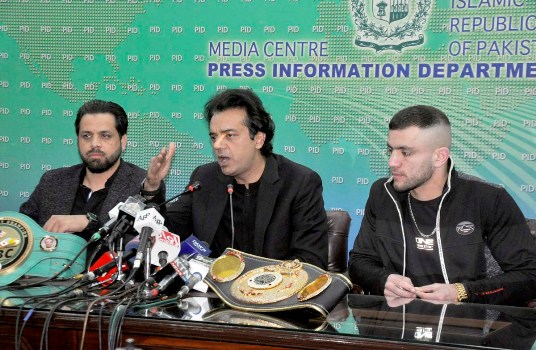 Addressing a press conference, he said two sports talent hunt drives under the KJP would be launched from March 12 at Gujranwala to select the best athletes of wrestling and weight lifting and promote sports culture in the country.

Flanked by Boxing Champion Usman Wazir, he said that trials would be conducted across the country to choose talented athletes which would be trained to participate in global competitions.

He said the KJP has also appointed international champion Usman Wazir as talent hunt ambassador to promote sports and encourage young players, especially from less developed areas to bring laurels to the country.

Usman Dar urged the youth falling in the age bracket from 15 to 25 years to get their registration for participation in the Kamyab Jawan Talent Hunt Sports to drive for various sports.

He said the Kamyab Jawan Programme would also launch a boxing talent hunt drive from the home town of Usman Wazir, Gilgit-Baltistan to choose boxing stars and would organize a mega boxing event there in June.

Dar said according to the United Nations Development Programme (UNDP) 94 percent of youth didn’t have access to grounds and sports facilities and this was the reason, he wanted to work for the youth of this country so that they could display their abilities in every field.

“I want sports to get the status of the economy in Pakistan so that the youth can get opportunities to come to the fore,” he said.

Usman said KJP was ensuring the distribution of loans on a purely merit basis and thousands of young people were running their businesses through these loans.

He said the government has approved Rs 40 billion for Kamyab Jawan Business Loans to benefit over 26,000 youth who have qualified for the soft loans under the Kamyab Jawan Programme.

He added that over 50,000 youth have been provided employment opportunities under the KJP in the agriculture, manufacturing and services sectors.

Usman Wazir said the Kamyab Jawan sports dive would support every talented athlete so he could bring laurels to the country by proving their mettle at the international level.

He said, “We would launch mega-events to bring international boxers and promote soft image of the country through sports.”