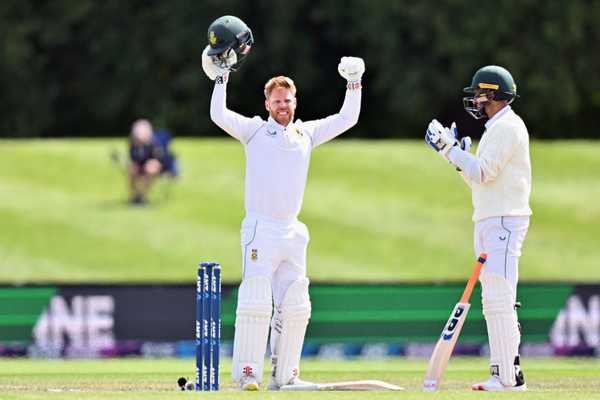 Christchurch, New Zealand: An unbeaten 76 from Kyle Verreynne put South Africa in a strong position as they extended their lead past 300 in the second Test against New Zealand on Monday.

South Africa were 232 for seven at lunch on the fourth day at Hagley Oval in Christchurch, a lead of 303, with wicketkeeper Verreynne having celebrated his maiden half-century and Kagiso Rabada on two.

New Zealand, 1-0 up in the two-match series, fancied their chances if they could take early wickets when play resumed Monday with South Africa leading by 211 on 140 for five.

But Verreynne and Wiann Mulder made the most of the benign wicket to put on 78 for the sixth wicket and leave New Zealand facing a record run chase to win the Test and sweep the series 2-0.

The highest successful chase at Hagley Oval was the 201 Australia achieved when beating New Zealand by seven wickets in 2016.

And the record fourth-innings total to win a Test anywhere in New Zealand is 348 by the West Indies to win by five wickets in 1969.

It was New Zealand seamer Kyle Jamieson who finally broke through to end Verreynne and Mulder’s stubborn resistance.

Jamieson had overstepped with the last ball of his 13th over and the extra delivery proved a blessing when it was edged by Mulder, who had made 35, to a diving Tom Blundell behind the stumps.

Marco Jansen added nine to the score before he fell to a sensational one-handed catch by Will Young racing around the boundary from deep midwicket.