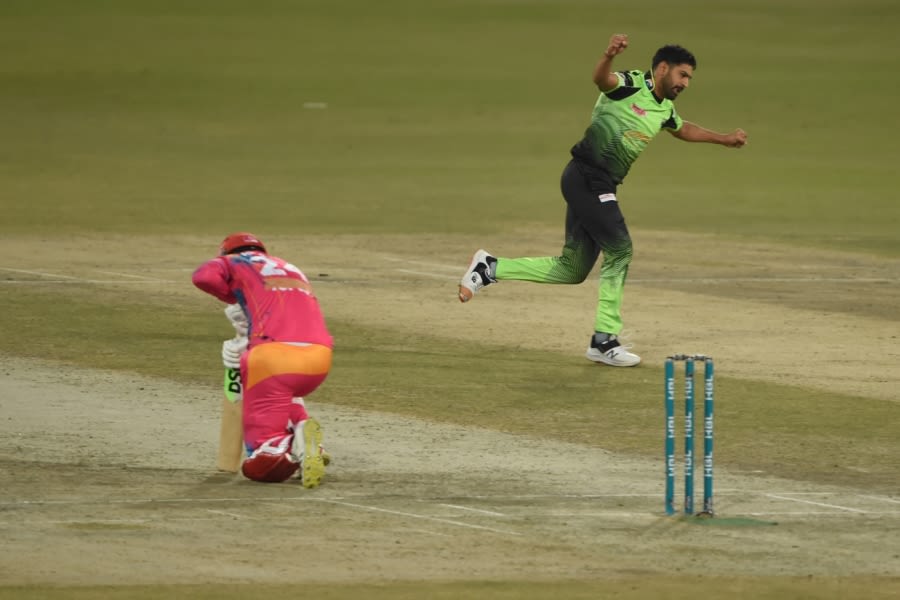 LAHORE: Lahore Qalandars beat Islamabad United in the thrilling Eliminator 2 of the HBL Pakistan Super League 7 to book a berth in the final here on Friday night before charged full house

Lahore Qalandars will take on Multan Sultans in the final on February 27, Sunday.

In fact, David Visa’s was the hero of the match whose all-round performance helped Lahore

Qalandars reach the final after beating Islamabad United in the second eliminator of the event.

over of Islamabad’s innings and played an important role in the success of his team.

Chasing the target of 169 runs, Islamabad United’s first four batsmen looked helpless in front of the bowling of Shaheen Shah Afridi and Zaman Khan and returned to the pavilion with a total score of just 46. Paul Sterling (13), Shadab Khan (14), and Liam Dawson (12) crossed the doubles figures.

The highlight of the day was Azam Khan’s batting, who batted responsibly with Alex Hales, and added important 79s run for the fifth-wicket partnership and lightened Islamabad United’s dying hopes. Azam Khan was dismissed for 40 off 28 balls with the help of 2 sixes and 3 fours. Alex Hales was sent packing for 38 runs with the help of six and two fours.

In the last over, Islamabad United needed 8 runs. Muhammad Wasim Jr, who did not score any runs on the first two balls, was run out while trying to take a double on the third ball and returned to the pavilion.

Earlier, Lahore Qalandars won the toss and opted to bat first. Though they lost two quick wickets when openers Fakhar Zaman (1) and Phil Salt (2) was sent packing by Dawson, Abdullah Shafique and Kamran Ghulam then batted with great responsibility and added significant 73 runs for the third-wicket stand.

Kamran Ghulam was the third Qalandars’ batter, who was sent back to the pavilion by captain Shadab Khan at a total of 3-80. Kamran struck 26-ball 30 runs hitting 3 fours and 1 six. Abdullah Shafique emerged as a top scorer for Qalandars as he hammered 52 runs off 28 balls that included 4 boundaries and 3 towering sixes.

Hafeez also played a sensible knock of 28-ball 28 runs wrapped with 1 boundary while Samit Patel played 18 balls to score 21 runs with the help of 1 four and 1 six. The most interesting and entertaining innings was played by phenomenal David Wiese, who faced just 8 balls to smash quickfire 28 runs hitting 1 four and 3 towering sixes.

Liam Dawson and Mohammad Wasim were the picks of Islamabad United bowlers, who grabbed two wickets each conceding 24 and 25 runs respectively. Captain Shadab Khan and Waqas Maqsood got one wicket each.