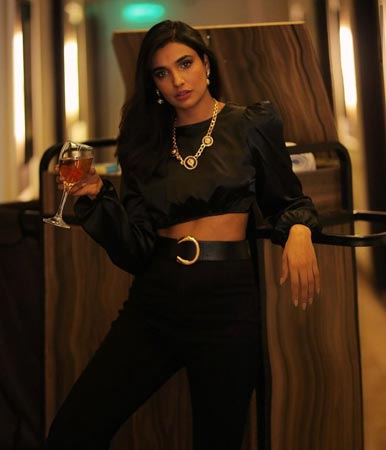 The dusky diva Amna Ilyas is known for her bold personality. The supermodel-turned-actress often lands in hot waters for her unapologetic attitude and her fashion statements. Here she is again, taking over the internet by storm with yet bold statement!

Amna Ilyas is one of the top models in Pakistan as numerous fashion brands love working with her. She is a big part of the fashion industry and won a Model of the Year award recently. She even appeared as a judge in the beauty competition Veet Miss Super Model.

Following the success of her modelling career, Amna quickly transitioned into acting. She made her debut in the hit 2013 film Zinda Bhaag featuring Bollywood legend Nasiruddin Shah. Amna has gone on to star in hit films like Good Morning Karachi, Saat Din Mohabbat In, Ready Steady No, and Baaji.

The model-cum-actress is also a fitness freak and keeps sharing her fitness regime with her fans and followers. Taking to her Instagram, the fashion diva shared some sizzling clicks from her recent shoot in an all-black chic outfit with a caption,

“If someone drunk texts you, appreciate it, they are thinking of you when they can barely think straight”

This bold caption sparked criticism among the netizens and they started flaking her with harsh comments.

What do you think about this statement by Amna Ilyas?