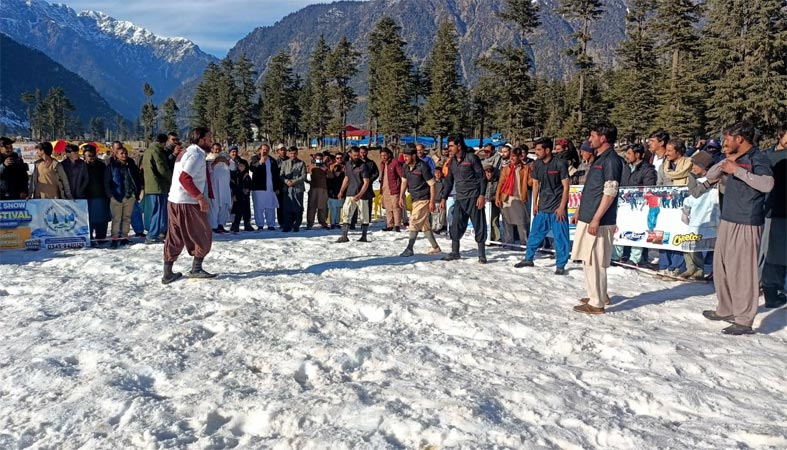 Annual snow kabaddi competitions have started in Swat in which players play kabaddi on ice in extreme cold. 8 teams are participating while each team consists of 7 players this time in the tournament.

With the onset of winter in the Swat Valley, various sports competitions are organized to promote winter tourism in which snow kabaddi is also played every year.

Due to continuous snowfall in Kalam Valley, more than two feet of snow has been frozen. In a situation where people are usually confined in their homes, the same Kalam youths are playing snow kabaddi in this extreme cold and minus five degrees Celsius temperature.

Every year a snow kabaddi field is set up in the middle of the plain forest of Kalam in which different teams participate. Aziz Kalami, the organizer of the tournament, told that during the snowfall, the movement and activities of the people are restricted, which harms their physical health. The game of Snow Kabaddi was introduced so that the youth of the area could focus on exercise instead of sitting at home due to the cold. Aziz Kalami is a doctor by profession. He said that the purpose of “Snow Kabaddi” is to promote winter tourism and to create awareness and protection of birds.

Imtiaz Khan, a local player from Kalam, said that they used to play kabaddi in summer but during heavy snowfall, the experience of playing kabaddi in negative temperature was wonderful as they did not feel cold and did not fall on the ground due to snow.

“We demand from the Khyber Pakhtunkhwa government that the best kabaddi players are present here, so a regular and national Snow Kabaddi team should be formed to further promote the game.” He added

All the arrangements and expenses for “Snow Kabaddi” used to be ensured by the local youth out of their own pockets but this year the local hotel industry including District Youth Affairs has also contributed to it. If the government turned their attention to this game, this sport can be turned into a national sport and can also play an important role in domestic tourism.