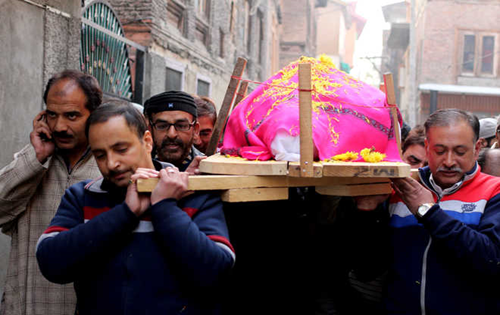 ISLAMABAD: A classical example of Hindu-Muslim unity was re-established in Indian illegally occupied Jammu and Kashmir (IIOJK), when hundreds of Muslims attended the last rites of a Kashmiri Pandit in south Kashmir’s Pulwama district.

According to Kashmir Media Service (KMS), Makhan Lal Raina, 80, of Tamla-Hall village in Pulwama died after a brief illness. He was a retired teacher and one of the prominent figures in the area.

“We have been living together for centuries and this is our social obligation to stand by the minority community in hard times. Also, let’s hope it sends out a message of brotherhood,” said a local Muslim, Abdul Hamid.

Raina’s family is among 808 families that didn’t migrate in the 1990s.

Last week, Kanhaiya Lal, 80, of Washbugh village died. Upon getting the news, local Muslims from the area flocked his residence and carried out his last rites.