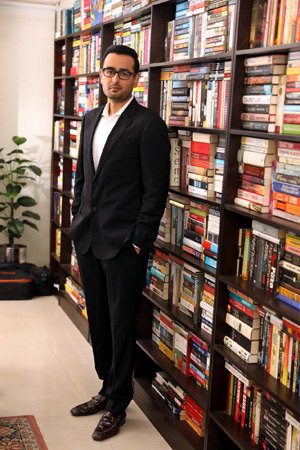 Awais Khan is an award winning writer. Based in Lahore, Awais’ debut novel In The Company of Strangers brought not only the complexities, contrasts and differences within Lahori society to a worldwide audience, but was notable for establishing Pakistani literature and writers firmly within the English language literary scene.

His second novel, No Honour, also set primarily in Lahore, is a brilliant exposé of the heinous practice of honour killing. Something rarely discussed, yet sadly still prevalent in some parts of South Asian society.

Awais Khan is also owner and teacher at The Writing Institute, which offers intensive online creative writing courses to all writers of fiction, from seasoned and experienced authors to those just setting out and wishing to learn the tips and pitfalls from one of Pakistan’s literary shining stars. Alumni of The Writing Institute include many published authors from the UK, USA, Canada, as well as from Pakistan.

Hello Awais, it is great to be able to talk to you about writing and books. I wonder if you could tell us a little about yourself and how you ended up as a writer of fiction.

Thank you so much for having me. I am a writer of commercial/literary fiction with an emphasis on Pakistan. Apart from writing, I do a lot of teaching and work in real estate too. I never thought I would be a writer. I’ve always been an avid reader, but it wasn’t until I was in college that I realized that maybe I could be a writer too. Still, it was many years before I actually turned to writing.

Getting published is extremely difficult at the best of times, but it becomes even harder when you’re from Pakistan. Despite being a country of 220 million people, Pakistan does not have a single literary agent and a very small publishing industry. We don’t have a single one of the mainstream big five publishers here. I started submitting to literary agents after I finished editing In The Company of Strangers with Hazel Orme. I got turned down by dozens of agents. Only seven ever asked to see the full manuscript and Annette Crossland was the first one to offer representation. I pounced on the chance and haven’t looked back since. Securing a publisher was even harder. A lot of the big publishers didn’t see a market for my book, but we persevered and almost two years later, we had two deals in hand for in The Company of Strangers. Then in 2020, No Honour got picked up by Orenda Books. I’ve also signed a film deal for in The Company of Strangers.

It is said we all have a book in us. Even so, the process of committing to writing a book can be very daunting. What advice would you give to anyone who is thinking of writing a book, but can’t get started for any number of reasons?

Writing is hard work. Anyone who tells you otherwise is lying. There is no hard and fast rule, but I think one must write for the love of writing. If you’re writing for the millions, I’m afraid you’re in for a bit of disappointment. Sure, there is a chance you could hit the jackpot, but mostly that doesn’t happen immediately. So, before you write a book, think about why you want to do it. Do it because you love to write. Money is also important, but the love for writing trumps everything else.

Your novels are multi-layered, with elements of romance, crime, thriller and literary fiction. Is there a genre of writing you would like to try and write that you have not yet tackled?

I would love to be able to write fantasy someday. I am such a huge fan of Lord of the Rings, but the process of world building is extremely complicated and requires lots of time and effort, so it’s quite a challenge. Having said that, I have dabbled in Young Adult fiction and absolutely relished the challenge.

Where did the initial story concepts for In The Company of Strangers and No Honour come from? What or who inspired the stories and why was it important for you to write about the themes in each book?

In The Company of Strangers was mostly based on observation. I had the chance to observe how the elite behaved with each other and how beneath the veneer of charm and kindness, a lot of social evils and bitterness festered. In The Company of Strangers was my way of showing Pakistani society for what it was. With No Honour, there was a great deal of research involved. I wrote it because honour killings are so common in Pakistan and I felt that I should use whatever influence I had to make sure this horrible practice was exposed so that it could become a thing of the past. It is so tragic and unfair that women lose their lives for the simple act of loving someone.

You are brutally honest in your depiction of all aspects of society, including those many would find unsavoury and taboo. Were you concerned that the subject matter may court controversy and did you fear any negativity?

I think that if writers start worrying about what others might think of their work, then they’ll be worrying for a very long time. It is true that the self-doubt never leaves you and to some extent I did wonder if some people might find the depiction of Pakistani society unsavoury, but I also couldn’t just lie and present a rosy picture just because some people might be unwilling to face the harsh truth of what happens in Pakistan. A certain responsibility comes with being a writer.

What messages do you hope readers will take away from your books? What would you like readers unfamiliar with Lahore and Pakistani society in general to learn and understand about the city and country and its people.

With fiction you have the opportunity to not only entertain the reader, but also to maybe educate them. There is a great deal of misconception in the West regarding Pakistan so I hope that some of the myths are dispelled when people read my books. Also, with a book like No Honour, I hope to spread the word about the scourge of honour killings in Pakistan and how we can all come together to end this gruesome practice.

What book are you currently reading and do you have any recommendations for ‘books / authors you really should read’?

I am currently reading What’s Left of Me Is Yours by Stephanie Scott. Some books I’d like to recommend would be:

This House of Clay & Water by Faiqa Mansab

The Kindness of Psychopaths by Alan Gorevan

She’s Mine by AA Chaudhuri

OUT by Natsuo Kirino

The Secret History by Donna Tartt

Away with the Penguins by Hazel Prior

The Waiting Rooms by Eve Smith

Hum If You Don’t Know the Words by Bianca Marais

The Verdict by Osman Haneef

The Chalk Man by CJ Tudor

What are your favourites genres of writing? Which writers and books have inspired you the most?

My favourite genres would be commercial fiction, thrillers and SFF. I get inspiration from everywhere, but I remember being enthralled by Leo Tolstoy’s Anna Karenina and Donna Tartt’s The Secret History.

A lot of people think that writing talent is innate. There may be some truth in that, but I am a living, breathing example of how you can learn how to write. If you were to read my writing from fifteen years ago, you’d laugh at me. It may take time, but you can certainly learn how to write. Besides, I think nobody is ever perfect. You keep learning.

What are your top three tips for improving your writing?

What are the three most common pitfalls writers fall into when writing a book or trying to get published?

Some writers try to mimic other bestselling authors in the hope that they’ll end up making the same jumbo money. The truth is that publishers often do not want to publish books with very similar subjects. Some writers take criticism too personally and just give up. When approaching literary agents, a lot of writers don’t follow submission guidelines which must be followed to the letter.

If you had not become successful and established as an author, what would you be doing instead?

I would most definitely be a banker or in a similar profession.

Are you working on any new projects and when can we expect to read any new books?

Absolutely! I am working on another book for Orenda Books which is out in 2023. I can’t go into a lot of detail, but it is set between Lahore and London. I am also working on a few private projects just for fun and to explore my horizons.

How do you organise your writing routine? Are you strict and write a set amount of time per day, or a target of the number of words to reach? When do you find your creative output to be most productive?

I am probably the wrong person to answer this question as I really have no routine. I write whenever inspiration strikes, but more importantly, I work really well with deadlines. If you ask me to write a book, I’ll always find an excuse to avoid doing just that, but if you tell me I have to submit it within six months, I will write it even if I kill myself in the process. I am a night owl, so naturally I write better at night. Unfortunately, I have no set amount of time for writing. I just go with the flow.

I’ve not really suffered from writer’s block, but I know a lot of authors who have. The best thing to do is to not write for some time. Allow your mind to relax a little. When you return to writing after a break, the words will usually flow. If nothing works, there’s always the threat of a deadline. That generally gets the work done.

The e-book, Kindle digital reading platforms were supposed to see off the physical print book and the closure of bookstores. Yet there has been a resurgence in physical book sales during the pandemic. Why do think this is?

The fact that sales have surged during the pandemic is not surprising. More people are working from home and as such they have more time on their hands. The fact that bookshops are still going strong doesn’t surprise me either. A bookstore is so much more than a place that sells books. It’s a community. It’s an experience. You can say the same about physical books.

What do you prefer? A printed book or a digital book?

I love the fact that Kindle has made books more accessible, but nothing beats the feeling of having an actual book in your hands. The experience is completely unique. I have over 4,000 books in my library, so I find it hard to believe that physical books will ever die.

How do you fuel your writing? What are your go to snacks that get you through a long stint at the laptop?

I eat a lot. And by that, I mean a lot! My favourite go to snacks are:

I’m not really a chocolate person, but I don’t mind a Mars or Twix on occasion.

A final question. Where can we find out more about Awais Khan, your books and The Writing Institute?

I am pretty much an open book and quite active on social media. I can be found on:

I can also be reached at www.awaiskhanauthor.com.

The writer is a poet, writer, teacher and traveller based in Worcester, United Kingdom. He Tweets at @ateafilledpoet