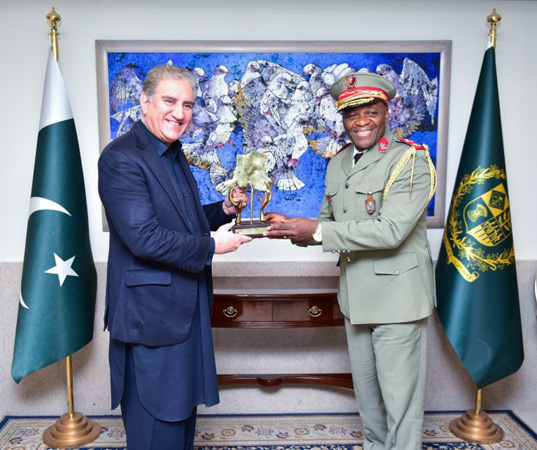 Virtually delivering a statement at the United Nations during the handover ceremony for the Chair of the G77 and China , he said, “a herculean global effort will be needed to enable the developing countries to recover and move back to the path of achieving the SDGs within the targeted timelines.”

“The developing countries need financial support of at least $4.3 trillion to do so.”

He said, “today, the world is facing a triple crisis — the Covid-19 pandemic; the related economic downturn; and the threat posed by climate change.” “We are still battling a vicious virus which has taken a massive human, economic, social and psychological toll. Our Group had warned that if all the world’s people, including those in the developing countries, were not rapidly vaccinated, the virus would roam and return.” “Due to vaccine inequity, this is what we are witnessing. It is why we are meeting virtually today. The lesson must be learned. Vaccine production and universal distribution, and reinforced health systems, are the best response to the mutating COVID-19 virus and to ending this pandemic.”

He observed that the pandemic had affected the developing countries disproportionately. Both because of weak health systems and meager resources, millions in our countries had suffered enormously and mostly in silence, he noted.

He said, “apart from lost lives, over 150 million have been pushed into extreme poverty. More than two score developing countries are in debt distress. A few have already defaulted. Over twenty countries are food insecure. Famine stalks some, especially in conflict zones in Africa and in Afghanistan.”

The achievement of the Sustainable Development Goals and Agenda 2030 had been set back by at least a decade, he said adding these resources must be mobilized from all possible sources: debt restructuring; fulfillment of the 0.7 percent ODA target; redistribution of the $650 billion new SDRs and larger concessional finance from the IMF and the multilateral development banks.

“Developing countries cannot recover if their budgets are further constrained by austerity packages, imposed increases in energy prices, and weakening of their currencies. No country must be prevented from serving its people,” he added. He underlined the need to address the structural and underlying causes of underdevelopment and growing inequality.

The minister said during the past forty-five years, the Group had made significant contributions towards advancing the economic and social objectives of the developing countries. “The group had conceived many of the innovative ideas and approaches for international economic cooperation, such as the 0.7 percent ODA target; special and preferential treatment for developing countries in trade; and duty-free market access for the Least Developed Countries (LDCs).”

From the first UNCTAD Conference through the Rio Summit, the adoption of Agenda 2030 and the SDGs, to the recent Climate Change Summit in Glasgow, the Group of 77 and China, and its members, have been the propellants of progress in international development negotiations, he added.

“In the current trying times, it is essential for our Group to retain cohesion and unity in its collective endeavors to ensure and promote prosperity for our peoples in conditions of equity and equality.

The foreign minister, in a meeting with the Chief of Staff of Land Forces, Lt. Gen. Asinda Fall of the Democratic Republic of Congo (DRC), conveyed greetings from President and Prime Minister of Pakistan to President of DRC Felix Antoine Tshisekedi Tshilombo. General Fall is on an unprecedented six-day visit to Pakistan at the invitation of his counterpart.

Both sides expressed satisfaction at the traditionally cooperative and cordial ties. Coordination of positions and mutual support for each other’s candidatures at multilateral fora was also flagged. The foreign minister expressed pride in Pakistan’s steadfast and unmatched support and contribution to peacekeeping, peace-building and peacemaking effort in DRC with 53,000 uniformed personnel under UN auspices from 2003. He praised the Congolese President’s contribution to promoting democracy and ably steering African Union as its Chairperson. Foreign Minister Qureshi also conveyed an invitation to his counterpart Cristophe Lutundula Apala to visit to Pakistan. He offered further training opportunities for DRC diplomats at Foreign Service Academy (FSA) Islamabad. He also urged the Congolese side to avail of Pakistan’s Technical Assistance Program facility for DRC youth in medicine, pharmacy and engineering. General Felix’s visit has set a positive tone for further strengthening and deepening of bilateral ties.