The £56k-a-night penthouse where Meghan Markle had her babyshower

* The show kicks off in New York at celebrity-favourite The Mark, a 106-room hotel that boasts a $75,000 a-night penthouse suite 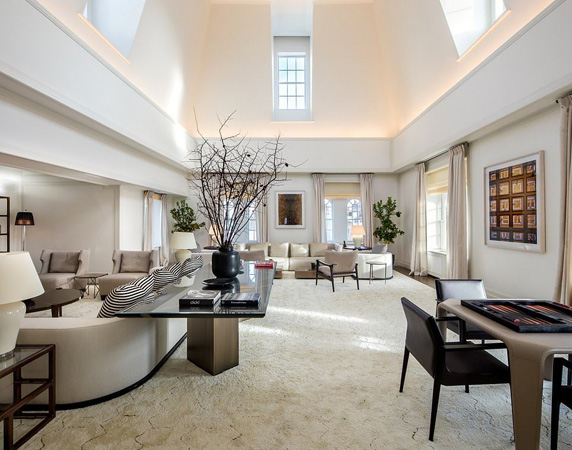 On-call Michelin-starred chefs, pop-up ice-skating rinks and elephants wandering past your infinity pool. New series The World’s Most Luxurious Holidays on More4 goes through the keyhole of eye-wateringly expensive rooms – some of which have never been seen by the public before – at some of the most exclusive hotels on the planet.

And it takes us behind the scenes to reveal how staff keep the richest and most discerning guests in the world happy.

The show kicks off in New York at celebrity-favourite The Mark, a 106-room hotel that boasts a $75,000 a-night penthouse suite.

The cameras glide through the 10,000-square-ft apartment, which features five bedrooms, six bathrooms, and a 2,500-square-ft private rooftop terrace.

The penthouse has hosted guests who have stayed for ‘up to a year and a half’, we learn – which would cost just under £30million. One penthouse guest was such a dog lover that they turned the second primary bedroom into a ‘dog bedroom’.

In the living room, General Manager Manuel Martinez shows off the 26ft- high ceiling and the grand piano. And here the cameras zoom in on the giant Fendi rug that’s worth just under £150,000.

The camera crew then leads us up to the roof terrace, where Martinez reveals that they once set up an ice-skating rink for a family of VIP guests.

Ahead of the next new arrival in the penthouse – who can’t be named – a dedicated team prepares the space until it’s ‘pristine’. It takes seven hours and six room attendants to service the suite to ‘perfection’. 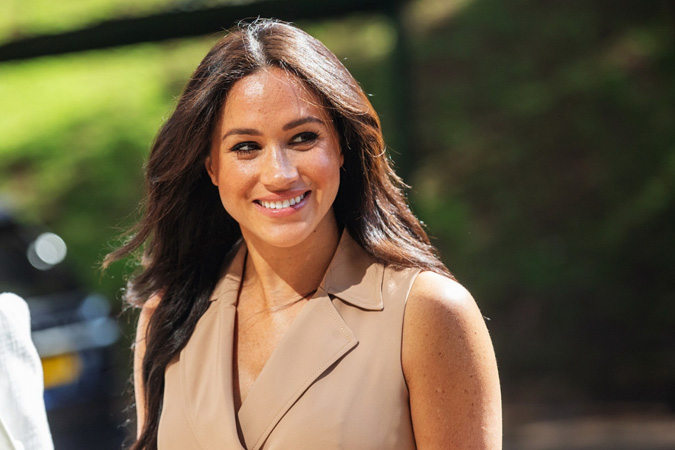 One hotel worker is seen shining a light inside a vase to inspect for dust. He later plucks individual specks of dust from the curtains and tidies them away in his suit pocket.

If a penthouse guest calls the reception, the phone should be picked up in no more than three rings, we learn.

Before the cameras, an attendant calls reception from the suite to test this out – and the phone is answered sharpish.

The Mark can provide two butlers, a sommelier and a chauffeur to guests of the penthouse. For £5,143, they can also enjoy exclusive use of the hotel’s vintage sailboat, which is over 100 years old and is the only one of its kind in the New York harbour.

The cameras show the boat in motion, drifting by the Manhattan skyline. In the past, guests have anchored by the Statue of Liberty, dined on lobster lunches and enjoyed Dom Perignon tastings while on board. The sailboat’s captain says that the ‘top prosciutto slicer’ in the city once got to work on carving a leg of ham on the deck.

This isn’t the only gourmet experience for guests – Michelin-starred chef Jean-Georges Vongerichten oversees ‘The Mark Restaurant by Jean-Georges’ in the hotel, which is on-hand ‘twenty-four-seven’ to cater to the guests of the penthouse.

Vongerichten is seen in the kitchen brandishing a wedge of black truffle, which was specially imported from Australia.

Another scene takes viewers inside a meeting room, where the hotel’s ‘dedicated team of guest liaison specialists’ convene to discuss the upcoming guests. They order whatever groceries the guests would like. One guest requests a ‘hypoallergenic set-up’, so the team arranges to ‘de-feather’ their room. Another team member reveals they’ve purchased a pair of designer Christian Louboutin shoes for one guest to give his wife as a gift.

Next, the cameras take us to Vila Azzurine, a vast £180,000-a-week mansion within five-star resort Vila Vita Parc in Portugal’s Algarve region that, the narrator tells us, ‘is so exclusive the public has never seen inside – except for now’.

Mansion, by the way, is no exaggeration.

Guests here have six bedrooms at their disposal and 19,500 sq ft of space to enjoy.

Katya Bauval, the Director of Sales and Marketing, reveals that the hotel has to ‘vet every single client who is interested in renting the villa’ before they agree to rent out the space.

Vila Azzurine guests can land their helicopters in a designated landing space before being whisked to the villa by buggy, we’re told.

Once there, they’ll discover Italian tiles costing £1,667 per square metre, a Louis Vuitton hammock that faces out to sea and a rooftop terrace with a bar that can accommodate parties of 50 to 60 people, plus an outdoor 82ft swimming pool.

Taking no chances, the hotel hires a falconer, Nelson Santos, who deploys his birds of prey to scare away seagulls tempted to flock around the pool.

The dining options, we learn, are something special.

While ordinary members of the public are faced with a three-month waiting list to eat at the hotel’s two-Michelin-star restaurant Ocean, Vila Azzurine guests have the head chef, Hans Neuner, ‘at their beck and call’, we’re told.

He reveals that some guests just want a ‘basic sandwich’ made with the best ingredients, whereas others might request a kilo of caviar wrapped in gold leaf.

One resort worker explains that they once had a guest who lived in a suite at the resort for almost two years. When he said that he was craving a particular cheesecake from New York, the hotel staff flew all the way to the Big Apple to pick it up. He says that it’s ‘the most expensive slice of cake’ they ever sold on the property.

Something to wash the food down with? There’s a ‘spectacular’ wine cellar holding an estimated £316,825 worth of wine to plunder.

The cameras also show us the toys at guests’ disposal, which include limited-edition Porsche Cayenne Dakar 84s worth £120,000 each. Only 84 of them were made.

There’s also a private yacht available to take them to ‘private spots’ along the coast.

The cameras then travel to South Africa’s Kruger National Park, where they unlock the door to Royal Malewane’s £16,000-per-night Africa House, a luxury villa that sleeps up to 12 guests in six en-suite bedrooms.

Owner Liz Biden reveals that they have hosted heads of state and celebrities at Africa House in the past.

Biden guides us around the guesthouse and reveals that she personally selected every piece of furniture in the property. ‘Even the ashtrays are bought by me,’ she says.

The real selling point of Africa House is the infinity pool. ‘Most days’ elephants walk past the pool on their way to the nearby waterhole, we’re told. One former guest tells the cameras that the elephants started drinking from the pool when he was swimming in it. ‘It was the most amazing thing you could ever experience in your life,’ he says.

Next, the film crew heads out into the bush with the rangers and trackers, who scout the savanna to prepare safari tours for the guests. The narrator reveals that almost half of the world’s seven ‘master trackers’ are employed by Royal Malewane.

The trackers check for animal prints. One finds buffalo excrement and works out that the herd is heading south. Another tracker finds a ‘drag mark’ from where a leopard hauled her prey. They follow the path of the leopard, which they find feeding in the bush. They note that this means she will likely be in the same position when they bring guests there on a safari later in the day.

One of the most special experiences that guests can avail of is a ‘bush dinner’. Seven Royal Malewane employees transport food and drink to a ‘luxury tent’ that’s a 20-minute drive away from the hotel.

The team sets up the dinner, putting lanterns in the trees and the chef starts cooking a pan-fried fillet of ostrich.

Just before the candlelit dinner begins, a tracker spots a herd of elephants walking past the tent. ‘A true bush experience,’ he says.

The World’s Most Luxurious Holidays debuts on Thursday, January 13, at 9pm on More4.