US deficit falls 34% in October-December quarter 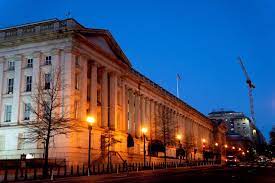 Washington: The US budget deficit shrank in the first three months of the fiscal year amid a surge in taxes paid by individuals and corporations, the Treasury Department said on Wednesday.

As the economic recovery from the Covid-19 pandemic picked up speed, the government brought in a third more revenue compared to the same period of 2021, for a record total of just over $1 trillion, according to the data.

That caused the deficit to narrow to $378 billion in the October-December period, 34 percent less than the same quarter of 2020, Treasury said.

Spending also hit a record of $1.4 trillion in the quarter but was only four percent higher than the comparable period a year earlier, Treasury said.

With inflation picking up speed, interest paid on government debt rose 15 percent, almost entirely due to the rise in borrowing costs for inflation-adjusted securities, according to senior Treasury officials.

The consumer price index surged seven percent for the 12 months ended in December, the highest rate in four decades.

The final month of the year also was notable for posting the smallest deficit since September 2019, a Treasury official said. And when adjusted for calendar differences shifting some benefit payments, the government posted a small surplus of $2 billion.