Sultan hopes 2022 to be year of Kashmir’s freedom 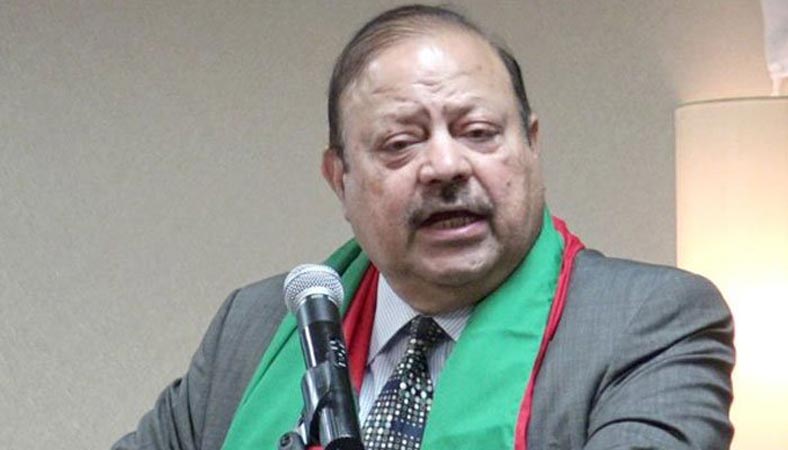 Azad Jammu and Kashmir (AJK) President Barrister Sultan Mehmood Chaudhry on Saturday expressed his hope that 2022 would be proved as the year of Kashmir’s freedom, salvation and independence from illegal occupation of India.

In his message on advent of New Year, the AJK president addressed to Kashmiris around the world while talking to his Adviser for Britain, Barrister Karamat Hussain here at the President Kashmir House.

“It (New Year) will be the beginning of a new era of prosperity and development in AJK and the year of salvation for the oppressed people all over the world,” he said.

The AJK President said now the Kashmir issue had entered an important and decisive turning point so it was the responsibility of all of us to work together to achieve the ultimate goal of freedom of Illegally Indian Occupied Jammu and Kashmir.

He urged to stand up against Indian atrocities and raise the issue of Kashmir aggressively at every international forum. Barrister Sultan assured the people of Occupied Kashmir that the children of Azad Kashmir stood shoulder to shoulder with them in their struggle for independence; and the sacrifices of the martyrs of occupied Kashmir would not go vain.

“The dark night in occupied Kashmir will soon come to an end and it will soon be free from India’s illegally occupation,” he remarked.

Kashmir refugees to observe first week of new year as ‘Right to self determination week’ Representatives of different Kashmiri organizations announced to observe first week of New year as Right to self-determination week. It was decided in a meeting organized under the aegis of Pasban-e-Hurriyat Jammu and Kashmir here on Saturday. The meeting revealed that rallies will be held across Azad Kashmir demanding implementation of the United Nations resolutions on the right to self-determination passed on 5th January 1949 to resolve the Kashmir issue. Speakers reiterated that it is the constitutional obligations of United Nations regarding implementation of its resolutions particularly on Kashmir issue. The speakers said that the Kashmiri people were demanding a free, fair and impartial referendum from the United Nations since 5th January 1949.

“It is the legal responsibility of the international community to end India’s unconstitutional military occupation and determine the political future of the state in accordance with the wishes and aspirations of the Kashmiri people”, they added.

The speakers further said that a public rally in the capital on January 5 would highlight the plight of Kashmir besides its status as a disputed state which will be decided only by the Kashmiri people.

The speakers said that the new delimitation of Indian-occupied Jammu and Kashmir was a planned abominable conspiracy of the Bharatiya Janata Party against the Kashmiri people.

It was also decided in the meeting that a rally would be held on January 5 from Burhan Wani Shaheed Chowk to the UN observer’s office and a memorandum regarding the right to self-determination would be presented to international observers.