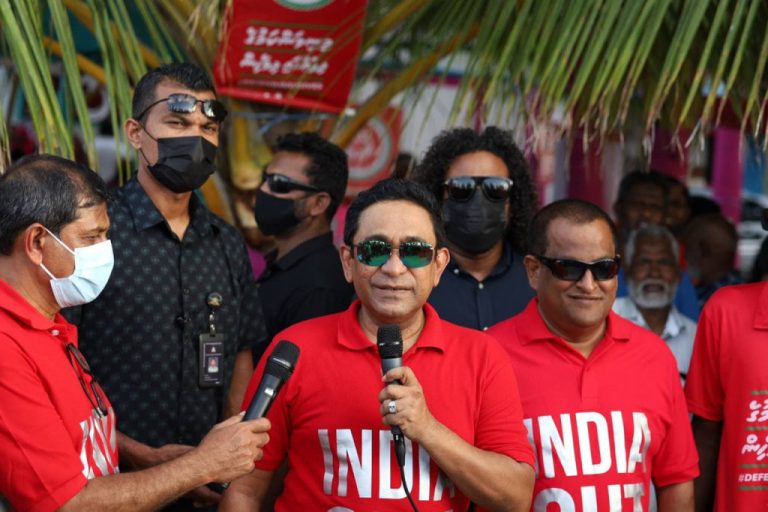 The “India Out” campaign in the Maldives is gaining momentum with every passing day with the protestors demanding the expulsion of the Indian military from the country, fearing the compromise of sovereignty.

Thousands of people have marched on the streets of capital Malé city calling for the removal of Indian military personnel from the Maldives. The protest demonstrations intensified about a fortnight since Maldives’s ex-President Abdulla Yameen walked free, after the Supreme Court overturned his conviction in a money-laundering case.

The protesters have been calling for the removal of Indian troops from the Maldives and the cancellation of military agreements with India.

Maldives police comes down heavily on those wearing “India out” slogan-inscribed T-shirts, seeking withdrawal of Indian military contingent from their country. This high-handedness has triggered nationalistic outrage & a sense of frustration against India. Is New Delhi listening? pic.twitter.com/DsG7cEvFK3

The soldiers in question are being stationed under various military agreements made under the current administration. The participants of the rally carried the national flags and clad in red shirts called for the immediate removal of Indian soldiers stationed in the Maldives.

The protestors accused the current administration and the New Delhi friendly President Solih of colluding with India to influence the 2018 Presidential Election and the 2019 Parliamentary Election.

Despite its threats, the opposition Progressive Coalition claims that the government lacks legal grounds to halt the nationwide "#IndiaOut" campaign.https://t.co/raW1n1Gkxl

“We are just protesting military presence in the country. We are not calling for a violent clash against India or Indians in Maldives,” Shifxan Ahmed, co-founder of Dhiyares, who has been active in the campaign, told Indian media. The anti-India sentiment didn’t just sprout overnight last year, but is nearly a decade old and can be traced back to when Abdulla Yameen Abdul Gayoom of the Progressive Party (PPM) became president in 2013.

India-Maldives relations deteriorated during the PPM’s five-year rule and the anti-India sentiment was apparent even back then, researchers say. “A lot of anti-India rhetoric was used during that time because the Maldivian government was pro-China,” said Dr. Gulbin Sultana, a research analyst at the Manohar Parrikar Institute for Defence Studies and Analyses.

We don’t need Indian military forces in Maldives. If they want to monitor Indian Ocean they can have a base in Laccadives. Once India military comes in, they don’t go out. They are slowly going to take over Maldives #IndiaOut

Sultanas said the first long-standing controversy was over the two Dhruv Advanced Light Helicopters (ALF) that were given by India to the Maldives in 2010 and in 2015, both of which were used for ocean search-and-rescue operations.

“These helicopters were for humanitarian purposes only, but some in the anti-India constituency, particularly Yameen’s party PPM, were trying to portray that by gifting these helicopters, India was creating military presence in the country because they were military choppers,” Sultana told IndianExpress.com.

Consequent to the agitations in 2016, the Yameen government had asked India to take back these gifted helicopters but India refused to take them back. By 2018 when Ibrahim Mohamed Solih assumed office, he immediately re-signed these agreements, extending the stay and use of these choppers in the country.

Mohamed Shareef, vice-president of PPM told media that “Any sort of military presence on our soil is not welcome and it is not welcome by a vast majority of Maldivians and these agreements have given India that right. We are going to annul these agreements because they don’t conform to our Constitution and sadly, we’re going to have to ask the Indian military to leave the day the government changes, which is going to be in another two years,” Shareef said.

“The government has invited this trouble to our shores. We are not against the people of India. Our people just want the Indian military to leave,” says Mohamed Saeed, the deputy leader of the opposition People’s National Congress (PNC).  “We are a very fragile country. We cannot afford to have any military presence of another country here,” he tells TRT World.

The opposition accuses the government of President Ibrahim Solih of signing secret deals with New Delhi that will allow Indian troops to be permanently stationed in the Maldives. A copy of the UTF agreement leaked earlier this year said Indian military personnel will be stationed there and Indian navy vessels will be allowed to use the dockyard for years to come. Saeed says an important agreement like this, which can impact a country’s foreign relations, should have been debated in the parliament and the details shared with lawmakers.

Former President Yameen, who governed between 2013 and 2018, had fostered close ties with China. He oversaw the inauguration of a 2.1 km-long, four-lane bridge connecting Male with the island of Hulhumale.

That’s the only bridge which connects islands in the archipelago where people otherwise travel on boats between different atolls. Beijing funded the $200 million project.

The Islamophobic government of Maldives has announced to halt and ban 'India Out' campaign as instructed by Hindutva extremist controlled Indian government.

Under Yameen’s government, the two countries signed a free trade agreement (FTA), eliminating tariffs on Maldivian exports of mostly fish, and opened the archipelago to Chinese goods and services.

While India has tried to take China’s place as the Maldives main financial benefactor, it still has a long way to go. Last year, New Delhi pledged to extend $500 million to Maldives in loans and grants. But only $17 million of that amount has so far been invested, says Saeed, citing government budget documents.