Movement against PTI from Jan 5

* PPP doesn't believe in politics of deals
* Rulers negotiating over blood of APS martyrs
* Solution to country's problems lies in fulfilment of Benazir's vision
* Democracy in Pakistan only exists on paper: Zardari 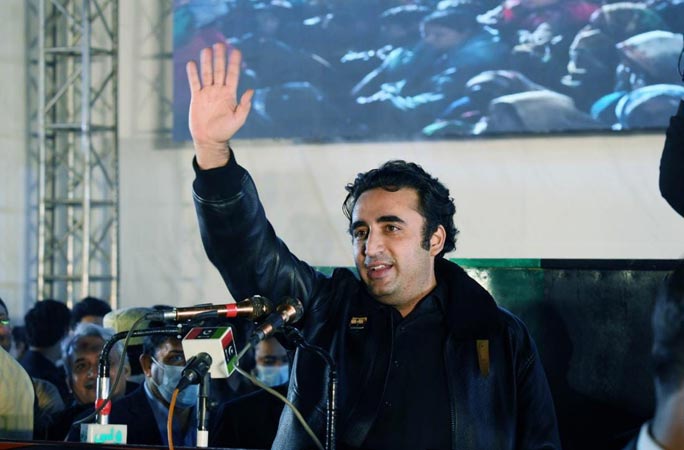 Pakistan People’s Party Chairman Bilawal Bhutto Zardari Monday announced that his party will launch a decisive movement against the government on January 5, 2022 with a rally in Lahore.

“Time has come to initiate a war against the puppet regime,” he said while addressing a public gathering organised to mark the 14th death anniversary of slain former premier Benazir Bhutto at Garhi Khuda Bakhsh.

“We need to fulfil the dream of Benzair Bhutto and revive this party across the country to restore the rule of real democratic forces,” Bilawal told party workers.

He said the country was facing multiple challenges including inflation and “bad governance” because elections in the country had been “rigged through different modus operandi”.

Bilawal said his party empowered the provinces in line with the vision of late PPP founder Zulfikar Ali Bhutto, a step which he said enabled the last PML-N government to build projects like Metro Bus and Orange Line train in Lahore.

“We made the provinces financially autonomous through NFC [National Finance Commission] award,” he maintained.

The PPP chairman said people of the country were struggling to make ends meet and poverty and unemployment had reached historic high during Prime Minister Imran Khan’s government.

“People’s hardships and economic woes of the country will never end as long as the country is being ruled by puppet rulers,” he remarked.

Referring to the media reports, Bilawal dispelled speculations that the PPP was entering into any deal with the establishment to come into power. “PPP does not believe in politics of deals. We only rely on people’s support. We can never resort to non-democratic politics,” he insisted.

Bilawal while urging the party leaders to take steps to revive the party in different parts of the country said that he will soon visit Punjab to launch an anti-government movement. 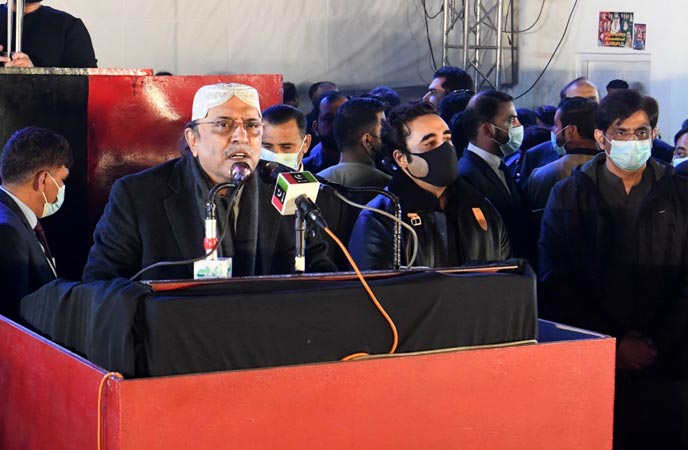 “Time has come to announce a war against this puppet government… we will announce movement to overthrow this government from Lahore [on January 5] where the foundation of this party was laid down.”

Bilawal said only PPP can topple the PM Imran-led government with the support of the masses and resolve the issues of the masses. “We will form the next government and elect our chief ministers in all provinces,” he told the charged gathering.

The PPP chairman was of the view that his party fought terrorism while the incumbent government was negotiating over the blood of Army Public School (APS) martyrs, adding that the prime minister and president of Pakistan have surrendered in front of terrorists.

Former president and PPP co-chairperson Asif Ali Zardari in his brief address said, “Being poor is not written in the fate of the people of Pakistan”. Zardari without naming anyone said due to some “stupid individuals, rich country like Pakistan” was reeling under economic crisis.

He said PPP will soon come into power and under the leadership of Bilawal resolve the issues of the masses.

He said democracy in Pakistan only existed on paper. He said there was no freedom of speech, freedom of living, or even breathing. 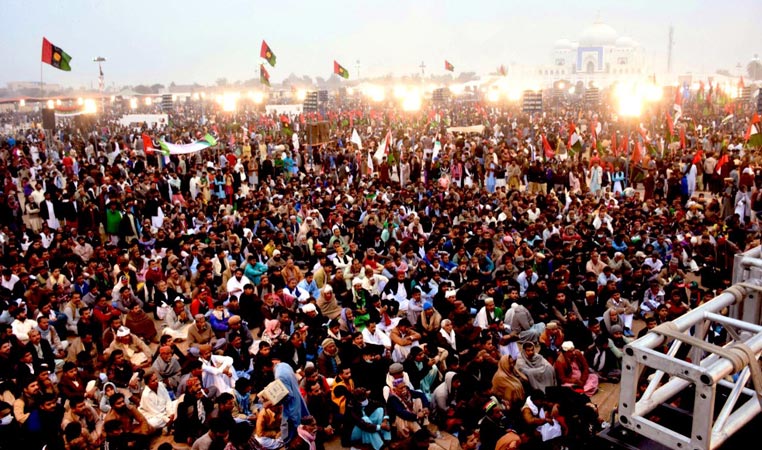 “Pakistanis are bearing the burden of a puppet and selected government,” he added.

They placed wreaths at the grave and offered Fateha. The central leaders, workers of PPPP from all over the country, including Gilgit-Baltistan, Northern Areas, AJK were also among those who placed wreaths and offered fateha on Shaheed leaders graves in Garhi Khuda Bux Bhutto.

They also visited the grave of Late Begum Nusrat Bhutto and placed the wreaths and offered fateha.

Ambulances and fire tenders were also deployed and first aid camps set up.

Additional Inspector General Police Sindh had established a base camp in Naudero to monitor the security arrangements.

Vehicles and motorcycles and mobiles of Rangers and 200 of police mobiles were patrolling the area and senior police officers were looking after the security, sources said, adding that police had set up pickets along the roads leading to Garhi Khuda Bux Bhutto to guide the caravans and clear the roads.