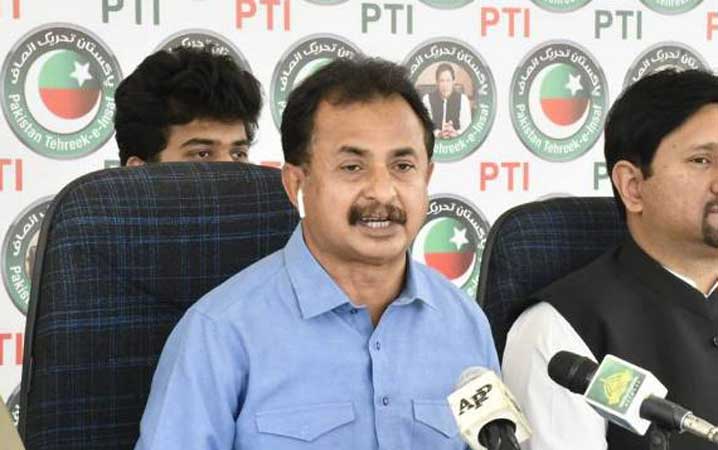 Opposition Leader in the Sindh Assembly Haleem Adil Sheikh Tuesday said the PTI had emerged as the only national party having deep roots, popularity and vote bank in all the federating units.

Addressing a press conference at the Sindh Assembly building, he said the opposition political parties had shrunk to certain areas.

He said PPP lost its vote bank in Punjab and KP, while PML-N and JUI-F were confined to Punjab and KP respectively.

“Imran Khan’s political strategy and approach is people-centric aimed at conquering the hearts of public,” Sheikh said and argued that Imran Khan had secured a big chunk of votes during the first phase of local government elections in Khyber Pakhtunkhwa.

He said the candidates who contested elections in KP as independents actually belonged to PTI and they used pictures of Imran Khan to attract voters.

The real contest in KP local government elections was PTI versus PTI, as five candidates who returned successful as independents had political affiliation with PTI, while many other leading vote gainers were also from PTI, he said, adding that various local factors affected the LG polls as well.

Admitting some shortcomings at the local leadership level and in distribution of tickets in KP, Haleem said different social, political and economic factors ranging from national to local level affected the overall results in KP, which also included growing inflation in the global post-Covid-19 scenario.

“Prime Minister Imran Khan announced that he would personally monitor the upcoming phase of LG polls in KP, Haleem Adil Sheikh said and hoped that PTI under the leadership of Imran Khan would be able to again show the same performance that was demonstrated in the elections of Azad Jammu Kashmir and Gilgit-Baltistan.

Referring to the collapse of a building in Shershah SITE area, Sheikh held the Sindh government, KMC and provincial environment protection agency SEPA responsible for the incident in which 17 citizens lost their lives.

PTI MNA Alamgir Khan, who has been striving to protect the metropolis from negative implications of poor sewerage system of Karachi, lost his father in an incident that took place due to poor management of sewerage system, he said.

The federal government has taken responsibility for Mehmoodabad, Orangi and Gujjar Nullahs and progress on them is satisfactory, while on the other hand, the provincial government had to clear 41 nullahs of KMC and around 500 drains of district municipal corporations which they miserably failed to do, Haleem said.

“They not only failed to clear the drains, but also failed in stopping disposal of untreated hazardous industrial waste into the sewers that was being termed the main reason for gutter blast in Shershah,” he said, adding that a joint investigation team (JIT) should be formed to probe into the incident and address concerns of the affected families.

Haleem said poor people who were living on the encroached state lands and over and along sewers and stormwater drains must be compensated and provided with alternative land for their relocation, while buildings and parking areas built on state lands and nullahs by the government departments and private entities should be removed at the earliest to avert occurrence of such sad incidents in future.

“Whenever the PPP’s corrupt systems required land, they acquired it by rendering the people homeless and carrying out ruthless anti-encroachment operations,’ Haleem said, adding that the Sindh government could not provide alternative land to the poor people.

He said the Sindh government wanted to regularize all the illegal constructions in the name of Nasla tower and they promulgated an ordinance in this regard as well but the PTI opposed the move.

He reiterated the demand for setting up a judicial commission under a senior judge of high court to look into the issue of vast scale land grabbing in Sindh, as there were over 3.9 million acres of state land was under illegal occupation throughout the province.

He said a large number of poor people were on roads and staged a sit-in against the forceful occupation of their lands in Nawabshah.

“If the affected people were not provided with justice, the PTI would join them in their protest,’ he added.

Sheikh also expressed concern over a letter by the Sindh government to PAS and PSP officers who were transferred under the rotation policy and relinquished their charge as per directives of the Establishment Division.

“The PTI will accept only an act that ensures devolution of power and functions as the third tier of government as per constitutional provisions, he said, adding that they would continue resisting the ‘Zardari and Bajari’ system.