A Dire Need to Put Weight behind Pakistan Army Again

There is a dire need today to stand firmly behind our armed forces, especially the Pakistan Army, the way the whole nation unanimously put its weight behind our brave soldiers in the aftermath of the Army Public School (APS) Peshawar massacre. It was the most deadliest and brutal incident of our history in which 150 people including innocent children were killed in a sheer act of barbarism. The whole nation just marked the seventh anniversary of the gruesome incident that took place in December 2014. The whole nation got united, including all political parties, across the board while agreeing upon a 20-point National Action Plan (NAP) aimed to uproot the menace of extremism and terrorism from the country. Pakistan is the country that is worst affected due to the war on terror. Our people, soldiers, police personnel, and law enforcement agencies sacrificed a lot to bring peace to the country. According to an estimate, 80000 people gave their lives in the war on terror in Pakistan while our economy suffered a huge loss of $67 billion.

The Pakistan Army launched several military operations including Zarb e Azb, Rah-e-Najat, and Rad-ul-Fasaad to give a peaceful Pakistan to our next generation. The tales of bravery of the soldiers and officers of the Pakistan Army are taught in the war colleges of the world. The Pakistan Army wrote history in the treacherous mountain passes of the frontier region as it took on mercenaries and militants that gathered under the umbrella of Tehreek-e-Taliban Pakistan (TTP). Just so nobody ever forgets, this is the first time any military force–ranging from the British Empire in the 19th century to the mighty Soviet Red Army in the 20th century to the mightiest force the world has ever seen, the US army in the 21st century – has ever conducted a successful military campaign in such difficult terrain. Just after the job was done and the tribal area was cleared of enemies of the state and army’s soldiers re-routed to other assignments and other areas, the British army chief visited the National Defence University (NDU) in Islamabad and expressed shock as well as admiration at the fact that, in his observation, Pakistani soldiers were the only ones in the whole world that never suffered from PTSD (post-traumatic stress disorder) even after very serious campaigns. It is also perhaps the only standing army that orders its generals right to the front whenever a campaign is going on, as opposed to the modern doctrine of “leading from behind,” which shields the senior-most officers from life-threatening bombs and bullets in the front lines. It is a matter of great pride that the Pakistani army’s generals lead from the front, not behind, which also explains why our officer corps has such a high death rate in active battle.

The tales of bravery of the soldiers and officers of the Pakistan Army are taught in the war colleges of the world.

The Pakistan Army is bravely fighting both on the internal and external fronts. It is no more a secret how India finances the terrorists and separatists in Pakistan while using its RAW. Pakistan has issued several dossiers exposing Indian-sponsored terrorism in Pakistan which included very specific information such as bank accounts and Indian nationals involved here at our land. It also included information about places of training camps for TTP, Baloch anarchist, and others groups. It is evident that the mastermind of the APS attack Mullah Fazal Ullah (now killed), other collaborators Gul Zaman Orakzai, Omar Narai (killed), and Muhammad Khurassani (Afghan custody) were in touch with RAW and NDS handlers in Afghanistan. India used Afghanistan as its proxy when Ashraf Ghani was the President but history proved that India was the biggest loser when Kabul was taken over by the Afghan Taliban. Indian embassy’s staff fled from Afghanistan like a loser in the darkness of night.

The Pakistan Army always tried to give peace a chance but whenever there is a threat to our land and people, the same army responded in a befitting manner with an iron hand. Even today, Pakistan is advocating for bringing stability in volatile Afghanistan to avoid any humanitarian crisis looming there. Pakistan is hosting the moot of Foreign Ministers of the Organization of Islamic Cooperation (OIC) Council in Islamabad and the agenda is to bring peace in Afghanistan and to avert any humanitarian crisis there. As the winter approaches, there is a dire need to help the Afghan people who are facing severe cold weather in a dilapidated country hit by decades-old wars. It has been our policy from day one that a peaceful Afghanistan will be in the interest of Pakistan because neighbors cannot be changed in the subject of foreign policy and therefore Pakistan is advocating for bringing peace in the region including Afghanistan.

It is now a reality that our army is the last resort to pull out the nation from any crisis. The army is called whenever there is any national disaster. The army is here whenever there is any law and order issue. The same army is always ready to perform its duties during Moharram, Election Day, or any other such event to help the civilian administration. So, there is a dire need to put our weight behind the army as we did after the APS attack. 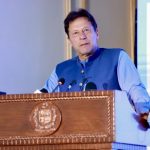