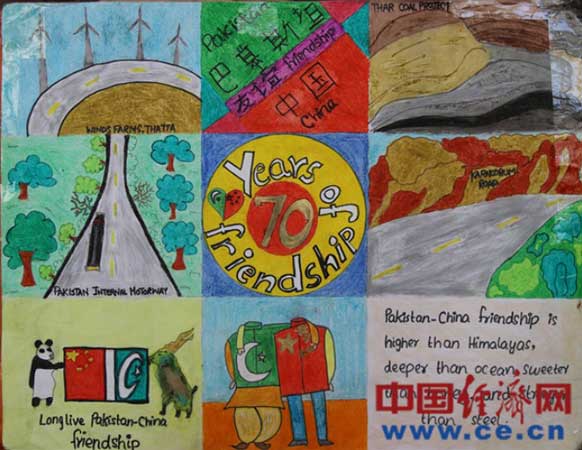 The report says, 2021 is the 70th year since China and Pakistan established diplomatic ties. Students from both countries depicted the precious friendship in their heart via a great many paintings at the ‘Art Exhibition of Chinese-Pakistani Students for Celebrating the 70th Anniversary of China-Pakistan Diplomatic Relations’.

Displayed at Henan Normal University in China, University of Sargodha and Roots Millennium Schools in Pakistan, Chinese and Pakistani students’ paintings impressed people of the two countries a lot.

Through these artworks, people can get a glimpse of the younger generation’s understanding of each country’s culture and people, and their recognition of China-Pakistan Economic Corridor (CPEC)’s positive role and the friendship keeping pace with times.”China-Pakistan relations remain unshakable and become even firmer as time goes by. CPEC not provides a powerful impetus for the green and sustainable development of Pakistan’s economy and society, but also promotes China-Pakistan cultural and educational exchanges and cooperation.

Art is beyond national boundaries. As a link of cultural exchanges between students from the two countries, the art exhibition is bringing our youth closer,” Pang Chunxue, Minister of the Chinese Embassy in Pakistan, delivered a speech at the opening ceremony.XuHengzhen, Secondary Inspector of the Education Department of Henan Province, Chen Guangwen, Deputy Secretary of the CPC Henan Normal University Committee, Dr. Fazalur Rahman, Director Pakistan Institute of China Studies at University of Sargodha, and Faisal Mushtaq, CEO of the Millennium Education group Pakistan, etc. attended the ceremony.