Mohsin Raza — the pioneer of music composition in Pakistan 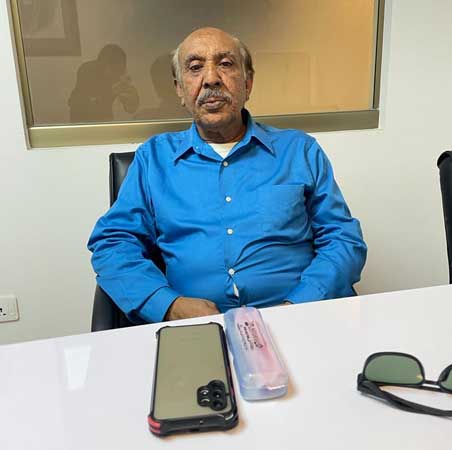 Where were you born and brought up? I was born in 1956 in Lahore. I spent my childhood in Lahore and also lived a small part of my life in Karachi. I went to Government College University for higher education.

When did you start your career?

I started my career at a very early age. I started it in 1971 at the age of 15. I composed the two mili-naghmas during the 1971 war in the vocals of Pervaiz Mehdi and Bilqees Khanum.

Where did you formally learn music composition from?

I did not formally take any classes on music composition. I never joined any academy. The knowledge regarding music composition came naturally to me but I did join Ustab Nazar Hussain and the pianist Master Saqib sahab for mentorship. There is no doubt I have learnt a lot by being under their mentorship. I also learnt a lot from Khawaja Khurshid Anwar sahab who was a very learned person and a civil servant.

What did you do while being in America and when did you come back?

I came back just two weeks ago. While in America, I joined a music community which is very small in scale and has a limited exposure because obviously American people’s taste in music differs greatly. They cannot get obsessed with the music of Pakistan like we do unless we promote ourselves and our culture thoroughly. But I have been to America many times because we used to do shows with Nur Jahan, Alamgir, Mehnaaz, Afshan Ahmed, A Nayyar, Alamgiri etc.

Which artists did you mostly work with?

I have worked vigorously with almost all the famous singers of Pakistan such as Malika-e-Taranum Nur Jahan, Moeen Akhtar, Mehnaaz, Amanullah, A. Nayyar, Alamgir and many others. I am talking about the era of the 80s. We used to do multiple shows in Pakistan and abroad and were largely appreciated. It was the time when the best music of Pakistan was in the making. People still groove to those songs. Songs of that era have a literary and aesthetic pleasure to them.

Why do people still groove to the music of the 1980s and ’90s? What is so special about old music?

There used to be a feel in old music. The lyrics were meaningful and had a literary angle to them. Therefore, old songs still give us aesthetic pleasure.

How do the musicians were able to record such successful albums?

People were true to their jobs. Only the relevant person was used for the certain type of tasks. People were experts in their areas. A learned composer composed the melodies, a well-rehearsed singer sang the songs, the recording labels were also expert and used to record the songs perfectly. This is how a collective team effort was regarded for the popularity of a song which is a rare phenomenon now.

How do you see the music industry of today? Are all the concerned people doing their jobs properly?

Musicians are not experts in their areas. PR is playing a major role in the promotion of present day musicians. Mostly do not have the apt knowledge of high notes, low notes, chords and raags. The roots of this can be traced back to early 2000s when music composers were solely concerned about the money making business devoid of the aesthetic pleasure that each kind of music is meant to give. Musicians these days are just focused on making money and their prime goal is commercial success. Nobody can match the singing skills of the old classic songs because makers do not have any interest in reading poetry.

What is your opinion about the old songs’ remakes that current musicians largely tend to do?

I totally discourage that. Musicians are doing a disservice to the future generation of their country by doing so. Moreover, they also lack respect for the pioneers of music in Pakistan’s history. Take the example of Ali Azmat who recently bad-mouthed madam Nur Jahan. This tells how much regard they have for the legacy of their artists.

Tell us something about the highlights of your career.

I am the pioneer of introducing song culture during political campaigns. I started working with the Pakistan People’s Party. My first composition for PPP was jakrey lakh zamana isko, torray gi zanjeer, aa gayi qaid hamari bhutto ki tasveer, benazir, benazir. Afterwards I also composed Bhutto dey naarey wajjan gey. But sadly, I have never been given even a single appreciation letter from PPP. Political workers and jiyaley still groove over my songs but nobody from the party ever recognized me for them let alone giving the royalties. Jahangir Badar, the then minister of PPP, took all the credit for my compositions and never let me get the due claim for my idea of introducing songs during campaigns to make them interesting. It was very unfair on his part. Moreover, I also hosted the Tarannum program with Malika-e-Taranum Nur Jahan. Furthermore, I hosted the famous horse and cattle show.

Do you have a message for Bilawal Bhutto Zardari in this regard?

I obviously want to make an appeal to the Pakistan People’s Party that they should recognize me for my compositions on the national level and also give me royalties for that because the appreciation letters and medals alone don’t run my kitchen.

What are some of your favourite compositions until date?

Tell us something about the appreciation letter that Biden sent you.

Is there any music artist in the present times that you want to work with?

I want to work with Samia Mumtaz, Zubia, and Tameer Hussain. They all are immensely talented singers but are not getting due recognition just because they do not have PR teams nor do they have hefty amounts to hire them.

Is there any message that you have for the present government of Pakistan?

Definitely, my message is for Imran Khan that he should also create jobs for the people from the music and showbiz industry who do not seem to be a perfect fit into the system but also need work at the same time to make both ends meet. I further want to say that we musicians are the same people whom you used to take on foreign tours to raise funds for the construction of Shaukat Khanum hospital but now nobody knows us. PM Imran Khan did not take cricketers on the fund raising tours but always supports them immensely. This is very unfair on his part because well-known singer Mehnaaz died awaiting any support from the government. Same is the case with every other artist of the 80s and 90s era. Government really needs to support them in one way or the other. Moreover, the government also needs to evaluate the performance of institutes such as NAPA in which people holding the higher posts are only making money and seldom make the right use of the budget that is being given to them. Our PM should ask NAPA which musician have they given the country in the last fifteen years?

What do you think needs to be altered in the music industry of today?

Musicians should have the proper learning of the music they are making. We see individuals as jury members of musical shows with zero know-how of music. Gharanas like Shaam Chauraasi, Qasoor, Gawalia, should be hired as judges. Similarly, people such as Shahid Hameed are writing books on music with totally wrong information. He misinformed about all the raags and chords in his book. Such things distort the image of Pakistan abroad. Such practices should be discouraged.