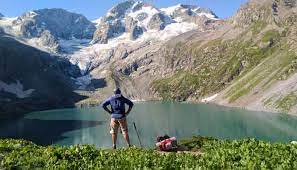 Travel enthusiasts will be pleased to learn that Pakistan’s Universal Service Fund (USF) has approved ten projects worth Rs11.5 billion to bring broadband internet services and an Optical Fiber Project to the Kumrat Valley, Swat, and 19 other under-served districts.

During this week, the USF Board met under the chairmanship of Secretary Ministry of Information Technology and Telecom (MoITT) Sohail Rajput, in which all Board members were present. USF Chief Executive Officer Haris Mehmood Chaudhry briefed the Board members on several development projects aimed at promoting connection for the country’s far-flung places.

The USF Board approved awarding of high-speed mobile broadband contracts to three telecoms while the Optic Fiber Cable Projects contracts were handed over to the PTCL.

The USF Board approved the award of high-speed mobile broadband contracts to a telecom for the Mianwali and Khushab districts in Punjab that will serve a population of around 0.37 million in 186 unserved muazas and an approximate unserved area of 5,080sq km.

The Board also approved the award of high-speed mobile broadband projects in tourist destination contracts to a telecom, covering the districts of Mansehra, Abbottabad, Swat and Upper Dir in Khyber Pakhtunkhwa province.

These projects will provide access to 153.83km unserved route length and an approximate unserved area of 65.51sq. km. The tourist projects in destinations like Janat Nazeer Wadi, Kumrat and others will strengthen the prime minister’s tourism programme and tourists and the local citizenry will enjoy access to the fastest internet and network services.

On the special directives of the Federal Minister for IT and Telecommunication, Syed Aminul Haque, the preliminary technical survey and design for these projects has been completed in record time while the projects are expected to be completed in minimum time.

The USF Board also approved the OFC Program for union councils, as well as the awarding of optic fiber cable contracts to PTCL for providing backhaul connectivity in Sindh’s Mianwali, Dadu, Jamshoro, Badin, and Hyderabad districts, which will serve an unserved population of around 3.7 million in 135 unserved union councils by laying 1,385 kilometres of optic fiber cable and installing 301 BTS Towers.

Dr Muhammad Sohail Rajput, Federal Secretary for Information Technology and Telecommunications and Chairman of the USF Board, noted that the USF was founded 15 years ago, but that the speed of project implementation in the first 12 years was dismally sluggish.