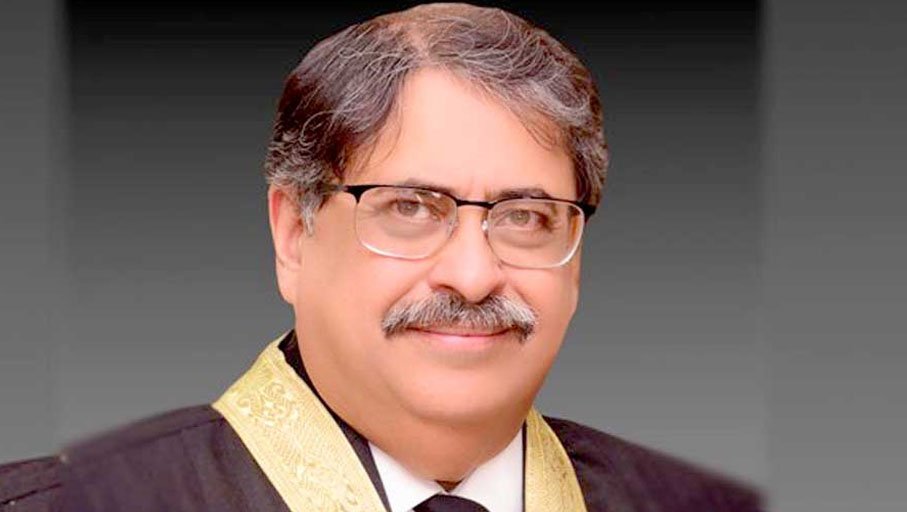 ISLAMABAD: Islamabad High Court (IHC) Chief Justice Athar Minallah remarked on Wednesday that the court needs a solid base to investigate a case or take an action, which is impossible unless the appellants bring evidence to back their claims.

The observation came during the hearing of a plea seeking formation of an investigation committee to investigate the truthfulness of the audiotape allegedly featuring former chief justice of Pakistan Saqib Nisar.

The IHC had summoned Attorney-General of Pakistan Khalid Javed, asking him to assist the court regarding the plea’s maintainability.

Justice Minallah asked why the court should investigate a case when the concerned parties don’t provide any audiotape before the bench.

“A commission is formed when there are grounds for it,” he said, asking the AGP who the court should issue orders to regarding an inquiry.

AGP Javed argued that Salahud Din Ahmed, the president of the Sindh High Court Bar Association (SHCBA), and Syed Haider Imam Rizvi, a member of the judicial commission (Sindh), have filed the petition under Article 199-C of the Constitution.

He asked why some people were coming to courts to become a proxy for only a certain ex-prime minister. He also added that an impression should not be given that the petitioner was contesting someone else’s case.

Sometimes people did not know they were being used, AGP Javed said.

“Why are people choosing only one prime minister and coming to court as their proxy? Thousands of people were sacked. No video in their respect came. It is a proxy war. Today everyone is saying he has two videos and he has four videos. This is the season of harassing and pressurising judges.

“Sometimes an audio, sometimes some concocted affidavit is released,” the attorney-general said, referring to an affidavit by former Gilgit-Baltistan chief judge Rana Shamim, in which he accused ex-CJP Nisar of colluding to deny bails to Nawaz Sharif and Maryam Nawaz before general elections 2018. If a facility is given to one PM, then why was it not given to Bhutto.”

The AGP told the court there was one other Prime Minister who was executed on the orders of the court. “Former prime minister Benazir Bhutto’s government was not restored, but that of another one was. Briefcases full [of cash] were also given in the past.”

If the petitioners wanted to conduct inquiries into past events, they should amend their petition, Khan argued. “Why should we go only till 2017? Let’s go to [the tenure of] Zulfikar Ali Bhutto,” he said. AGP Javed argued it should be found out why CJP Justice Sajjad Ali Shah was removed from his post. “Who were the suitcases full of money going to? Let us do accountability of all those who are alive,” he argued.

Criticising the conduct of bar associations, the AGP recalled that lawyers thrashed a district court judge in Mandi Bahauddin, while elsewhere they raised slogans against the chief justice on the court premises. At this, the CJ IHC remarked bars have waged a great struggle for the independence of the judiciary.

The SHCBA president said the AGP was holding bar associations responsible for every case.

“See the statements given by PM Imran Khan against the judiciary and judges. It is now being said to either do accountability for the last 70 years or not at all to divert attention.”

The petitioner contended that the judiciary was being made controversial through different tactics and the court could stop this practice by investigating the allegations against judges. At this, the attorney-general countered that all matters of the past could be sent to Parliament. “One appeal against conviction in the Avenfield reference is being heard in this court. That one appeal has perplexed the entire judiciary,” Javed added.

While admitting that those whose cases would be affected by the alleged audiotape had not approached the court, Ahmed said his stance was that courts were being made controversial. The judiciary could stop that from happening by ordering an inquiry, he added.

The IHC chief justice observed that any audio or video could be constructed in today’s age of advanced technology. “Anybody can make audio and ask for an investigation.

The court asked if they declare the petition seeking an investigation into an audio maintainable, what will be the impact on the pending appeals.

At that, AG Khalid Javed said: “I am saying this too that a proxy war is being fought. All these things lead to one appeal.” He said he was willing to file an amended petition himself, seeking accountability of the past incidents.

The SHCBA president countered that if the attorney-general wanted, he could get accountability of the past incidents through the government, asking why there was a need to connect this petition to those incidents. Salahud Din, the advocate, said the affidavit case was pending a hearing in this court.

Justice Minallah noted, however, that the matter of the affidavit was different because the person concerned — Rana Shamim — had himself approached the court. “You’re unsure yourself about the [authenticity of] the audiotape you’re mentioning. A commission can be formed when there are grounds. The people who have cases [which could be affected by it] have not brought the audiotape to the court. Why should we [take action]? Is there anyone to take ownership of the audiotape?” he questioned.

The attorney-general asked Salahuddin Ahmed to amend his petition to include such incidents in the past as well, vowing to take the matter to Parliament himself.

The court adjourned the hearing till December 24.

The original audio released by FactFocus carried the following alleged audio of Saqib Nisar, making damning statements on how Nawaz Sharif and Maryam Nawaz were jailed in 2018:

“Saqib Nisar: Let me be a little blunt about it; unfortunately, here it is the ‘institutions’ who dictate judgments. In this case, we will have to penalize Mian Sahib. And ‘they’ say, “we shall bring Khan Sahib.” Regardless of the merit, we will have to do it, and even to his daughter.

“Other person: But, in my view, his daughter doesn’t merit a sentence.

“Saqib Nisar: You are absolutely correct. I did talk to “friends” that something should be done about this but they did not agree. There will be no independence of the judiciary, so let it be…”.