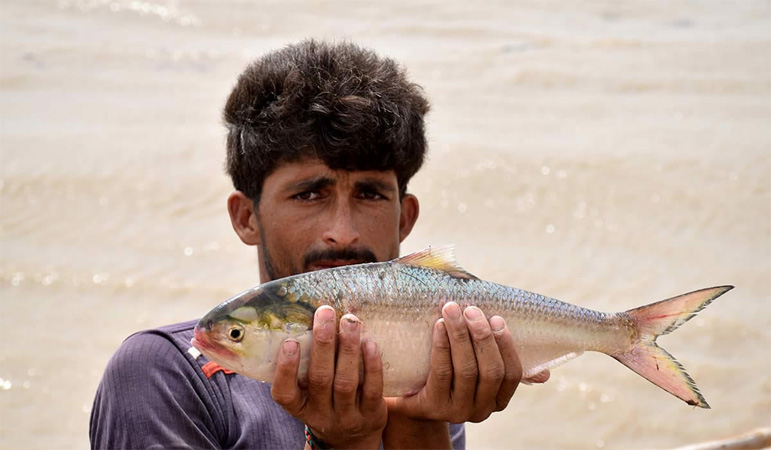 It was not long ago that fishermen would catch tons of palla — one of the most delicious aquatic delights of Pakistan’s southern Sindh province — every day from the mighty Indus River.

The fish, a migratory species, which would enter the Indus River in large groups for breeding from the Arabian Sea, were so plentiful that the fishermen had even sold them to the locals for free.

On the weekends, thousands of picnickers from Karachi, the country’s commercial hub and Sindh’s capital would travel to the nearby districts of Hyderabad, Jamshoro, and Thatta to enjoy the distinctive taste of palla at scores of roadside restaurants and along the banks of the Indus River.

The eateries are still open, but not their prime delight, which is rapidly dwindling mainly due to a gradual decline of water levels in the Indus River. The catching of young and small fish through hundreds of destructive nets erected by local influential at different points throughout the Indus Delta has exacerbated the situation.

According to Wazir Ali Baloch, the dean of the Faculty of Natural Sciences at the University of Sindh, Jamshoro, the steady shortage of water in the Indus River has reduced the travel passage for palla, making its catch much easier in creeks.

The fish migrate from the sea to the Indus River to breed, stay for two to three months, and then return to the sea to re-enter the river the following year.

“Until a few decades ago, the abundant water would fill the entire creeks of the Indus Delta, making illegal or legal hunting of palla fish difficult and enabling them to return to the sea in large numbers every year,” Baloch said, adding: “But this whole cycle has been disturbed due to shortage of fresh water coupled with illegal hunting of the fish.

“Palla is now restricted to a few branches of the Indus Delta (due to shortage of water), which has not only reduced its number to a huge extent but also made its hunting easier through nets.”

Only a small number of palla manage to escape the nets and breed up to the Kotri barrage, a breeding ground of about 285 kilometers (177 miles). But Baloch added that “very few” fish manage to return to the sea after breeding.

Echoing Baloch’s view, Ameer Jat, the head of the Coastal Community Development Organization, a non-governmental group that works for the welfare of the fishermen, said palla cannot proceed into the Indus River in large numbers due to the erection of banned nets on the mouths of creeks.

“Each fisherman would catch palla in several hundred every day during the season (June to August) until the early 1990s. But, nowadays, this number is not more than five to 10 per day,” Jat told Anadolu Agency.

The Indus Delta, which sprawls from downstream Kotri to the Kharochan town, located at the mouth of the Arabian Sea, is the rallying spot of palla, which, unlike most fish, swim in a straight line against the river’s strong currents.

Catching palla is not every fisherman’s forte, Jat explains and adds that it requires expertise and specially designed nets.

Whether, it is spicy palla biryani, or steamed or fried, the taste and aroma are irresistible.

Apart from Pakistan, different kinds of palla are also found in Iran, Bangladesh, India, and Iraq, but they all differ in taste.

“But those were the days when the rivers were free,” he said, referring to the construction of several canals and dams on the Indus River, which has seen perpetual water-sharing disputes between the provinces over the past 70 years.

“There is an urgent need to rehabilitate and recover the Indus River, not only to save fish but also to contain the rising sea erosion,” Baloch went on to argue.

He suggested that about 10 million acre-feet of water be made available downstream, as well as other steps that he believes must be taken immediately.

Any type of fishing should be prohibited in estuarine areas to stop palla catch before it breeds, in addition to ensuring passage for migratory fish and constructing fish ladders to cross the barrier/barrage, he added.

According to the 1991 water accord, 5 million acre-feet of water is required to fall into the Arabian Sea through downstream Kotri, Sindh, annually to maintain the ecosystem.

The Sindh government, for its part, has prohibited palla fishing in June and July, however, according to Jat, the ban is not being implemented in spirit.