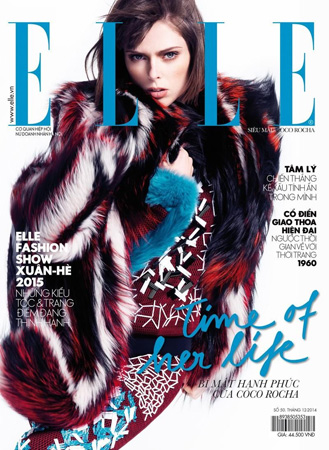 Elle magazine announced on Thursday it will stop using fur in all its editorial and advertising content worldwide, becoming the first major publication to do so.

The monthly lifestyle magazine, which originated in France and is owned by French media group Lagardere, comes out in 45 different editions around the world.

It has some 33 million readers from Mexico to Japan, with 100 million monthly online visitors. But Elle’s international director Valeria Bessolo Llopiz told an annual two-day fashion industry conference starting Thursday in Britain “that fur was no longer acceptable. “The presence of animal fur in our pages and on our digital media is no longer in line with our values, nor our readers,” she said. “It is time for Elle to make a statement … rejecting animal cruelty,” Bessolo Llopiz told delegates at The Business of Fashion Voices 2021 event in Chipping Norton, in Oxfordshire, southern England. Instead, she said the magazine wanted to “increase awareness for animal welfare” and “foster a more humane fashion industry”. The magazine has already dropped fur from 13 of its editions. Twenty more will drop fur from January 1, 2022 and the rest will start a year later.

“Fur has become old-fashioned”, she said, noting many brands had gone “fur-free” years ago.

“We are in a new era and the Gen Z, which is the golden target for fashion and luxury, has huge expectations in terms of sustainability and ethics,” she added.

Welcoming Elle’s decision, PJ Smith, director of fashion policy for the Humane Society of the United States, said he looked forward to other fashion magazines following suit. “This announcement will ignite positive change throughout the entire fashion industry and has the potential to save countless animals from a life of suffering and a cruel death,” he told the conference.

“Fur promotions belong only in the back copies of fashion magazines from days gone by,” Elisa Allen, the UK director of animal rights organisation PETA, told AFP. She welcomed decisions by publications – includeing British Vogue, InStyle USA, Cosmopolitan UK, and the newly launched Vogue Scandinavia – rejecting fur on their editorial pages and expects the move to soon extend to advertising.

CONSUMER PRESSURE — the decision comes as the fashion industry has faced pressure from animal rights activists to stop the use of real fur on humane grounds and mounting public opposition.

Smaller fashion weeks held in cities such as Amsterdam, Oslo, Melbourne and Helsinki have all banned fur but larger ones in Paris, Milan and New York leave it up to designers. Many big names have already chosen to no longer use fur.

They include Gucci, Versace and Prada, Burberry, Vivienne Westwood and Alexander McQueen, Donna Karan, DKNY and Michael Kors, as well as Jean-Paul Gaultier and Balenciaga.

A 2020 YouGov survey found that 93 percent of British people refuse to wear natural fur while another by Research Co suggested that in the US, 71 percent opposed killing animals for their fur.

In Europe, an FOP poll indicated that 90 percent of French opposed the fur trade, while 86 percent of Italians expressed opposition in a 2019 survey by Eurispes.

In a German poll by Kantar in 2020, 84 percent said cruelty towards animals and killing them for their fur was unacceptable.

Israel in June became the world’s first country to ban selling fur to the fashion industry. The fur industry itself argues that its natural product is being replaced with synthetic fur made with plastics that damage the environment. In November, French furriers wrote an open letter to Vogue magazine claiming it was “absurd” to present “plastic” garments as environmentally friendly, when they contain acrylic and modacrylic fibres.

The group has complained of a “climate of fear” created by protesters, which has encouraged designers to drop fur from shows and discouraged fashionistas from wearing it.

While fake fur coats are often made from polyester, which takes hundreds of years to biodegrade, some designers such as Britain’s Stella McCartney opt for plant-based materials. Others use natural fibres such as wool and feathers to mimic the appearance of fur.