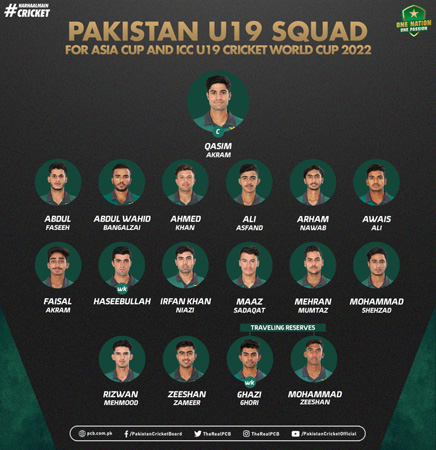 LAHORE: The Pakistan Cricket Board (PCB) on Thursday announced a 16-member national squad that will take part in the upcoming Under-19 Asia Cup and ICC Under-19 World Cup.The Under-19 Asia Cup will be staged in the United Arab Emirates from December 20 to January 2 and will be followed by the ICC Under-19 World Cup to be held in West Indies from January 14 to February 5, 2022.In the U-19 squad, Qasim Akram, openers Abdul Wahid Bangalzai and Mohammad Shehzad, and middle-order batter Irfan Khan Niazi will play in their second successive ICC U-19 World Cup. In the South Africa event two years ago, Pakistan had finished third. Qasim made his debut in the 2020-21 season and was impressive for Central Punjab across all formats, while Abdul Wahid scored a double-century for Balochistan in the ongoing Quaid-e-Azam Trophy to back up his good performances in the National T20. Irfan appeared for Central Punjab in the National T20 and has already earned the reputation of being a clean striker of the ball, whereas Shehzad was also one of the most prolific batters in the 2021-22 U19 one-day and three-day events.

Besides the quartet, the squad includes promising players like spinners Faisal Akram (left-arm-wrist-spinner), Ali Asfand (left-arm-spinner), Mehran Mumtaz (left-arm-spinner) and Arham Nawab (off-spinner). Faisal represented Southern Punjab in the National T20. Abdul Faseeh, Haseebullah, Rizwan Mehmood and Maaz Sadaqat were the standout performers with the bat in the domestic U-19 circuit. Pacers Ahmed Khan, Awais Ali and Zeeshan Zameer have also performed admirably besides impressing the selectors and coaches with their potential.

Chairman junior selection committee Saleem Jaffer said: “Selection of U19 squads is always one of the most challenging and difficult tasks due to the available pool of talent. And this selection was no different, but we have tried to pick the best available players who can help Pakistan win the World Cup for the country. The PCB has prepared a robust plan for pathways cricket and I can assure all teenage cricketers who have missed out on selection this time that they will get a chance at some stage down the line. I want to congratulate the selected players who have made into the squad for the UAE and the West Indies tournaments. I remain confident that this side has the capability and potential to do well in both the upcoming events.”