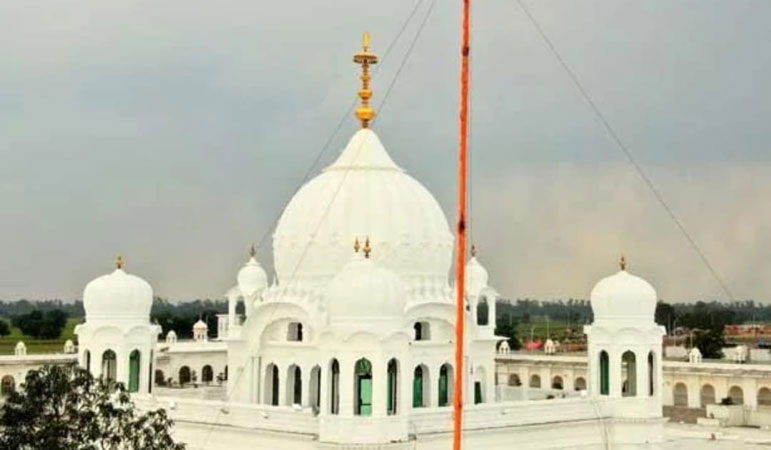 Soon after the picture surfaced, social media users showed their displeasure over ‘lack of respect’ and the act was termed “religiously hurtful” by an Indian journalist on Twitter, since Sikhism requires all visitors to keep their heads covered during visit to any gurdwara.

Referring to the shoot in question, the journalist goes on to say that Pakistani authorities should take notice of the incident.

Ministry of External Affairs (MEA) official spokesperson Arindam Bagchi issued a statement on Tuesday saying that Pakistan’s second senior-most official was summoned to convey “deep concern at the incident of desecration of the sanctity of Gurudwara Shri Darbar Sahib, Kartarpur by a Pakistani model and a clothing brand.”

“This reprehensible incident has deeply hurt the sentiments of the Sikh community in India and worldwide. Such continued incidents of desecration and disrespect of places of religious worship of the minority communities in Pakistan highlight the lack of respect for the faith of these communities,” an India-based news agency said.

Meanwhile, the clothing brand and the model issued separate apologies over the matter.

The clothing brand responded by deleting the pictures that had sparked outrage from its social media handles.

“The pictures posted on our accounts are NOT part of any shoot done by Mannat Clothing. These pictures were provided to us by a third-party (blogger) in which they were wearing our dress. Please note that Mannat has absolutely NO role in deciding how and where the pictures were taken. However, we accept our mistake that we should not have posted this content and we apologise to every single person who was offended by this. All the holy places are very sacred to us. The pictures and posts have been removed from all our media channels. Again, we apologise wholeheartedly for hurting the public sentiment. Believe us when we say we had no such intention,” the apology note from brand reads.

“Recently, I posted a picture on Instagram that was not even a part of a shoot or anything. I just went to Kartarpur to learn about the history and know about the Sikh community. It wasn’t done to hurt anyone’s sentiments or anything for that matter, however, if I have hurt anyone or they think that I don’t respect their culture, I am sorry,” the blogger was quoted as saying.

Earlier, Punjab Chief Minister Usman Buzdar took notice of the outrage on social media and sought a report from the chief secretary, stressing that “all religions are respected in Pakistan”.

“CM Punjab @UsmanAKBuzdar has taken strict notice of the incident occurred at Kartarpur’s Gurdwara and asked for complete report from Chief Secretary. A thorough inquiry will be done on this incident. CM Punjab reiterated that all religions are respected in Pakistan,” a statement issued by the Punjab government on his official Twitter account said.

“Modelling bareheaded for ladies’ attire, in the premises of Gurdwara Sri Darbar Sahib at #KartarpurSahib in Pakistan, by a Lahorite woman, has hurt the religious sentiments of Sikhs. Further, the pictures were uploaded on social media,” a Sikh journalist wrote.

Fawad, taking notice of the matter, said that the Kartarpur gurdwara is a religious site and “not a film set, the designer/model must apologise to the Sikh community”.

The corridor was recently reopened on November 17 for allowing Sikh pilgrims from India and all over the world to visit the gurdwara to celebrate the 552nd birth anniversary of their religion’s founder.