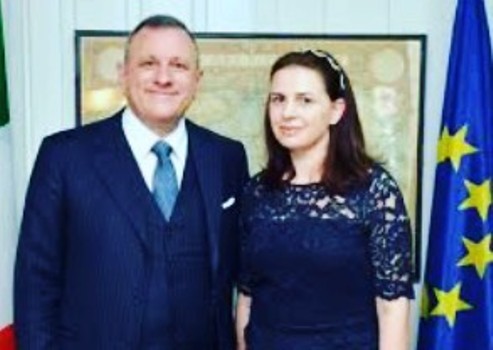 ISLAMABAD: Ambassador of Italy to Pakistan, Andreas Ferrarese on Sunday said that Women’s economic and social empowerment is essential for the development of any society and also for sustainable economic development.

In Pakistan, women are leading the economic and political arena and there are huge opportunities for women also in the Small and Medium Enterprises (SMEs) sector, the ambassador told, while he was along his wife Mrs. Albana Ferrarese in the annual charity bazaar held by the Pakistan Foreign Office Women Association (PFOWA). The ambassador said that Pakistani women are playing an important role in handicrafts, food and hotels, and many small and big businesses.

Today, the Pakistan Foreign Office Women’s Association held a charity bazaar to further highlight its economic and social role, he said. He stressed the need to increase such activities in the future so that women could move towards greater economic empowerment.

On this occasion, wife of Italian Ambassador Mrs. Albana Ferrarese, said that in the near future “we are moving towards establishing an Italian Institute of Culture in Pakistan, which will enhance cultural cooperation between the two countries and also help in bringing women of both the countries closer.” Albana Ferrarese said that she was very much impressed with the local art and craftsmanship of women in Pakistan, whose business model can now be easily developed in modern trade. She said that today is the era of e-commerce and women can take business orders from all over the world including European countries and move towards their economic strength.

“Pakistani women are very hardworking and skilled. There are many opportunities for them, including handicrafts, hoteling, and cooking,” she opined. She said that Italian pizza is very popular in Pakistan and Pakistani women are also good at making pizza. Albana Ferrarese said that these commonalities can help bring Pakistan and Italy more closer. She said the joint family system is of utmost importance in the shared traditions of Pakistan and Italy and these things will bring the two countries closer in the future.

She lauded the PFOWA for keeping up its charitable services even during the pandemic besides taking part in the awareness drive about diseases. Talking of dresses in Charity Bazaar 2021, she said that they are simply wonderful. You have got a variety of fabrics and then they are complimented with amazing colors that give you a message of joy and freshness.