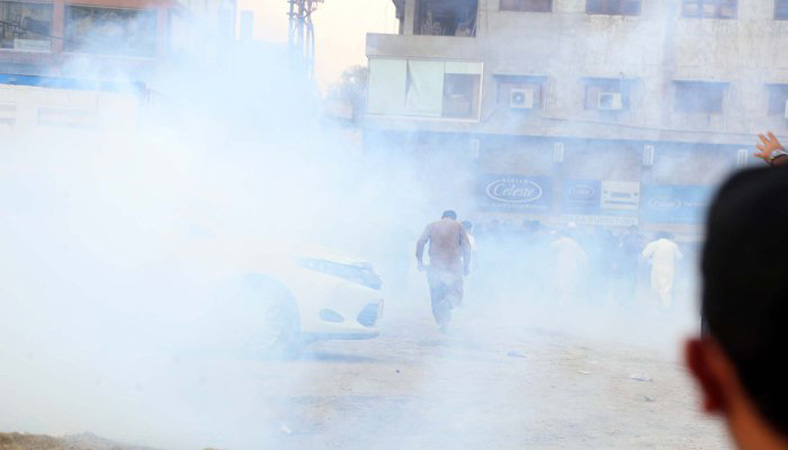 Protests by residents and builders erupted on Friday on Shahrah-e-Faisal following orders by Chief Justice of Pakistan Gulzar Ahmed to demolish Nasla Tower within a week, a private TV channel reported.

Police and paramilitary Rangers resorted to baton-charge and fired tear gas on the protesters outside the Nasla Tower. A protest call was given a day ago by Association of Builders And Developers (ABAD) Chairman Mohsin Shaikhani. The association has declared that work on any of its construction sites will remain halted. It maintains that the builders were in possession of no-objection certificates and despite that, the demolition work on Nasla Tower has been ordered.

The protesters, who had gathered in large numbers in the afternoon hours, attempted to stop the demolition work. As a result, the flow of traffic was severely affected on the road considered to be the city’s main artery. Contingents of police and Rangers were deployed to the site of the protest to disperse the demonstrators. They baton-charged the crowd and used tear gas shells in an attempt to dissuade it from blocking the roads or resorting to violence.

The Karachi police spokesperson said that protesters attempted to block Sharea Faisal as officials tried to stop them. He said that police officials tried to speak to protesters as they moved forward on the main artery in an attempt to get them to disperse. “Officials resorted to baton-charge after protesters blocked the road and interfered with the work of public servants,” he said. The police spokesperson said that no one was injured as officials cleared the road of protesters, adding that it was later opened for traffic.

He said that protesters were provided a separate place to stage their demonstration and were told to remain clear of Nasla Tower. The spokesperson said that officials and the city administration were talking to the protesters, adding that work on demolishing the building was underway.

SSP (East) Qamar Raza Jiskani said the protestors allegedly tried to take the law into their own hands and attempted to block Sharea Faisal near Nursery roundabout. “The police and paramilitary force took action and dispersed the crowd,” the senior officer said, adding that no one was arrested. He also hinted at the possibility of lodging an FIR against the protesters. Meanwhile, traffic remained suspended on the main artery that links the city with the airport and the national highway.

Later in the evening, the police issued a statement saying that demolition work was underway and that the protesters have been instructed to keep a distance from the main road and the tower. The spokesperson claimed that “no one was injured” during the police action taken. The road was now clear for traffic, the statement said.

Earlier in the day, the chief justice directed Karachi Commissioner Iqbal Memon to ensure the Nasla Tower building is razed to the ground within a week. The chief justice ordered the Karachi commissioner to ensure the process is completed within the said time frame and a report is submitted as well. “How soon till the process to destroy the building is completed?” asked the chief justice. “I can provide no time frame for this,” responded the Karachi commissioner. “Two hundred people are working on it.”

In response, the chief justice told him to double the staff to “bring down the building”. He wondered why authorities were demolishing the building from the ground first.