The death of a white lion: Animal rights activist Ayesha Chundrigar has petitioned the Sindh government to abolish zoo culture

The activist demanded that the animals be relocated to sanctuaries in other countries or that new sanctuaries be constructed in Pakistan. 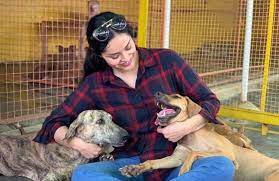 Ayesha Chundrigar, the founder of the animal rescue organisation ACF, is a vocal opponent of zoos and recently met with Sindh Local Government Minister Nasir Shah to demand an end to “zoo culture” in order to combat animal cruelty. She requested that sanctuaries be built or that the animals be relocated to another country.

Chundrigar’s meeting took place a day after word emerged on social media about the death of a rare white lion at Karachi Zoo. According to the Karachi Metropolitan Corporation, the animal died of pulmonary TB and pneumonia (KMC). The murder of the lion infuriated many netizens and celebrities, who took to social media to demand an end to zoos in Pakistan.

The ACF founder took to Instagram to share the news of her meeting with Shah. “In my meeting today with Nasir Shah, Minister for Local Government, I requested him to please end the zoo culture and either move all the animals to sanctuaries abroad or to make wildlife sanctuaries where animals run wild and free,” she wrote.

She also shared her feelings when it comes to caging animals in zoos. “I’ve never understood the fascination with imprisoning animals. We have all seen them on TV, living life in their natural habitats. Just something like The Lion King or National Geographic. Why can’t we just let it be that way? Why do we have to hungrily trap them as they unassumingly go about their business, bring them to polluted urban choke-holds and lock them behind iron bars? What’s the fascination in seeing a distressed lion up close who is completely uncomfortable in his surroundings?” she asked.

Chundrigar shared her experience of visiting a zoo for the time, recalling how disturbed it made her feel as a young child. “I picked up on this when I first went to the zoo at five and I saw an elephant angrily throwing food on people,” she wrote. “She wanted everyone to stop leering at her. And I screamed and asked my mum to leave because it wasn’t nice that people were teasing her. And then they started teasing me too. Then I saw young boys laughing while throwing soda bottles and wrappers in the lion’s cage to get a rise out of him.

“I couldn’t articulate my feelings at the time but I felt what the animals felt. Suffocated. I couldn’t breathe. I needed to leave. Go home. And guess what? I had the luxury to leave and go home while they spent day after day, year after year, life becoming a dizzy time-lapse of dullness punctuated by bouts of frustration.”

She also shed light on what motivates her to work for animal welfare. “Because I don’t get humans. I don’t understand our sick need to control and tame the wild, like being wild is a bad thing. I hate how selfish we are, how bloody arrogant and how we can make everything about ourselves.

“This lion’s fate is unknown to me. All I know is that we have a culture that thrives on enslaving free spirits and putting them in cages. You would witness a different culture if you taught your children to appreciate the raw beauty of animals. That is the magnitude of their significance in our lives. They saved my life when I was a child when circumstances threw me into darkness, and I’ll spend the rest of my life attempting to save theirs.”

Prior to the animal’s death, reports circulated on social media that food supply for animals at the Karachi Zoo had been discontinued due to the KMC’s failure to pay. A video of a famished lion, apparently from the Karachi Zoo, went viral, causing outrage.

The KMC dismissed such accusations as “propaganda,” claiming that the zoo had fed the animals for a week.

The ACF is a Karachi-based animal welfare organisation. They are working to rescue the city’s stray dogs from being culled by vaccination or neutering them, among other measures.