Ireland reverts to work from home as Covid-19 cases rise 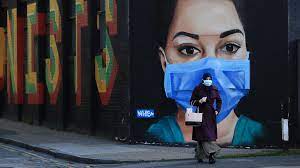 LONDON: As case rates and hospitalizations grow across the country, Ireland announced on Tuesday that it will once again require people to work from home while expanding its Covid-19 immunisation booster programme and certification scheme.

In a televised broadcast, Prime Minister Micheal Martin said it was increasingly clear the country was experiencing “another surge of Covid infection” and that he needed “to act now”.

“Our advice is now that everyone should work from home unless it is absolutely necessary that they attend in person,” he added.

Martin noted Ireland’s Covid passes scheme, based on vaccination or recovery from the virus, would now legally include cinemas and theatres, while bars and pubs would now be required to close by midnight.

He also said vaccine boosters would be extended to everyone with an underlying condition and everyone over the age of 50.

The last week has seen the second-highest rate of hospital admissions from coronavirus this year, according to Martin.

That is despite Ireland having one of the highest vaccination rates in the world, with around 90 percent of over-12s fully jabbed.

The country only fully reopened on October 22, after 18 months of rolling lockdowns introduced to limit infections.

Officials recorded 4,407 new cases on Tuesday, upon previous weeks, while more than 5,500 people have died from the virus in the country of around five million.

Dublin’s actions to reverse some of the rules’ easings are similar to those taken by other European governments dealing with similar escalating infection rates.