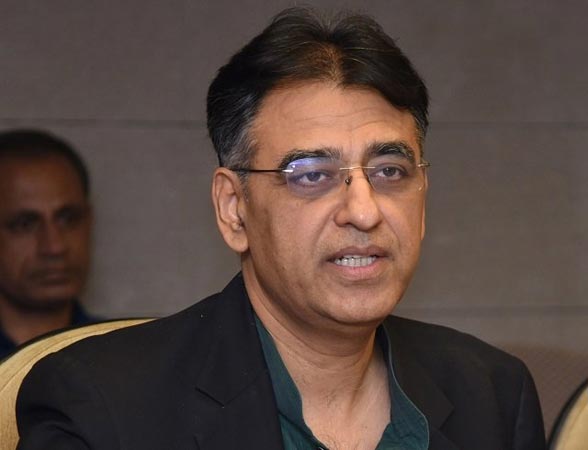 Federal Minister for Planning, Development, Reforms and Special Initiatives Asad Umar said that Khyber Pakhtunkhwa government were trained 100,000 youth in IT sector which would further uplift IT industry in country.

He said this while talking to media men during his visit to the concluding session of the two-day Digital Youth Summit held here at local hotel on Sunday.

Accompanied by KP Minister for Science and Information Technology Atif Khan, Federal Minister, Asad Umar said that in the last two years the export in the IT sector has been three times increased due to investors’ friendly policies introduced by the government.

“Pakistan is the 5th largest community in the world in the individual youth community, which is a clear indication of progress of Pakistan in the IT sector,” Asad Umar said. The trust of the foreign investors has been further cemented and billions of dollars investment coming to Pakistan in the IT sector, he said while answering a question. Answering another question, he said, 2.3 million jobs increased in 2018.

“There are a lot of development opportunities in agriculture in Pakistan and the government has given due attention that is why the crops of wheat, rice, sugarcane have come up in record,” Federal Minister Asad Umar said.

The government, he said, was focusing on the sectors which have opportunities for development like agriculture, IT and tourism sectors. He said record harvest of wheat, rice and sugarcane means the government is working on an appropriate line in the agriculture sector in the rural areas and the farmers were getting benefit from such progress. “However, in urban areas, there are opportunities in the construction sector and that is why a new boom is witnessed in the construction sector and all those areas related to construction industries,” said Federal Minister Asad Umar.

The construction industry, he said, has grown exponentially due to the interest of the Prime Minister, who himself is looking and monitoring the construction industries. Federal Minister Asad Umar has the largest foreign exchange reserves in the history of Pakistan, meaning the country is on the path of development. “The Corona threat still exists and urged upon the people to get vaccinations to avert the threat. “If the people do not get vaccinations, there will be danger of corona coming back,” Asad Umar said. “PDM is like a seasonal disease, it will end as soon as the cold ends,” Asad Umar said this while answering a question in a laughing mood. While appreciating the government of KP, he said, the provincial government is working on connectivity and digital technology training. Training more than 100,000 in the Informational Technology sector in the next one and half years would cost the government Rs 8 billion. “There are many opportunities for national and international investors in the IT sector of Khyber Pakhtunkhwa, which is very encouraging,” Asad Umar said.

” Certainly, the development of the IT sector will boost the digital economy of the province and events like the Digital Youth Summit are of utmost importance for innovative ideas in the digital world,” he added. The youth of Khyber Pakhtunkhwa have the talent to grow in the IT sector and providing digital skills training to graduate and undergraduate youth would enable them to find employment, he said.

Federal Minister Asad Umar and Shibli Faraz also paid visits to various sections and met with the youth in the Digital Youth Summit. The event was attended by a large number of national and international stakeholders and students specializing in the IT sector. Residents asked to be cautious; dengue larvae can breed inside houses

As the number of dengue cases had come down from around 80 to 20 patients daily due to weather conditions, the residents were asked to be careful as dengue larvae breeding could take place inside the houses because of the temperature suitable for its survival.

Chief Executive Officer of District Health Authority Dr Faiza Kanwal informed APP that around 20 to 25 patients had been brought to the allied hospitals of the city during last 24 hours, while earlier, the number of daily patients were 70 to 80. “This year, around 3200 dengue cases were brought to the three public sector hospitals of the city so far, of which 2222 were Rawalpindi’s residents while the number of cases was 17 in 2020 and 6193 in 2019,” she added. Dr Faiza said that as many as 3140 patients were discharged after treatment from the allied hospitals while 274 beds were available to deal with the dengue patients, including 175 at Holy Family Hospital, 69 in District Headquarters hospital and 30 in Benazir Bhutto Hospital.

During the ongoing anti-dengue drive from January 1 to November 12, the CEO told that the authority had sealed 380 premises, registered FIRs against 273, challaned 885, notices issued to 1814 and a fine of Rs 905,500 imposed on violations of SOPs in various district areas.

She added that anti-dengue teams visited 5680 sites out of the total identified 7580 hotspots from November 8 to 13, and required case response activities were carried out there.

“Dengue fever is a viral disease transmitted by the bite of an infected female Aedes mosquito,” adding it was not a life-threatening disease. Still, it can cause severe life-threatening complications if not treated properly. “If you have a high-grade fever of 3-10 days duration with associated symptoms like headache, muscle and joint pains, retro-orbital pain (pain behind the eyeballs) and skin rash, then you need to get yourself checked”, the CEO added.