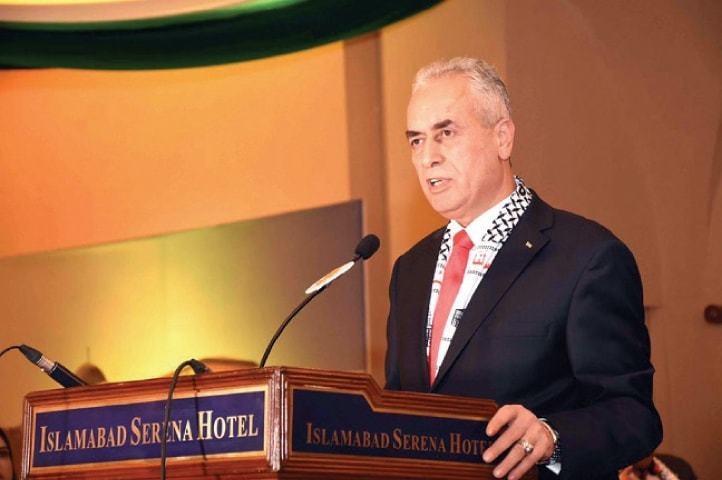 ISLAMABAD: Palestinian Ambassador Ahmed Rabei on Sunday expressed his country’s resolve to enhance existing bilateral ties with Pakistan in multi-sectors and take them to the optimum level for the benefit of the people of both countries.

“We are working on an extensive plan to enhance trade, tourism, cultural and educational exchanges for optimum bilateral relationships between brotherly country,” said the Palestinian envoy to Pakistan in an exclusive interview. Ambassador Rabei said that the Palestinian government was working out traders and chamber of commerce level collaboration with Pakistan whereas a separate economic desk was also established at the Foreign Ministry of Pakistan.

Palestine, he said has huge religious and heritage tourism potential with over 22,000 heritage sites registered in the UNESCO. Moreover, the Al-Aqsa Mosque is the first qibla (point of direction to offer prayer) as the Muslims go to Kingdom of Saudi Arabia (KSA) to perform Hajj should also visit their first Qibla. In a contrast, he mentioned that almost four million Christians visited Bethlehem and Nasra for religious tourism whereas only half a million Muslims visited Al-Aqsa Mosque.

“Palestine is the conduit of Asia, Europe and Africa which historically has imprints of various nations interactions, culture and traditions due to their invasions on their land,” Ambassador Rabei said. The Palestinians possessed a culturally diverse background and were flexible and easily adaptable to intricate and challenging environments.

The entire Middle East and surrounding region’s first-ever airport was established in Palestine whereas the region’s first Radio station was also established here which was headed by a Palestinian women that indicated the level of women liberty and empowerment back in the early twentieth-century era before British and Zionist Occupation. “Most of the early educationists in KSA and Kuwait were Palestinians that were highly educated and intellectually rich people in the entire region. We had the first school of the region in Palestine in 1921,” he underscored.

Ambassador Rabei said, “We have the Palestinian diaspora spread over 110 countries of the world whereas four Presidents of the South and Latin American states are Palestinians by origin.”
He proudly mentioned that the President of Uruguay has resisted the Israeli move to shift its embassy from Tel Aviv to Jerusalem.

“There are some one million Palestinians residing in Europe with a half million in Americas whereas we have a great disapora in Brazil owning millions of dollars resources and assets in that country,” the Ambassador proudly mentioned. He told that the Chinese government had certified two Palestinians as the only professional coffee grower and olive farmer in China that again testified Palestinian skill in agriculture.

“There are almost 321 parliamentarians globally who are Palestinians and two of them are in the US Congress including a female. Moreover, four ministers in the European Parliament are also Palestinians,” he said. To a query, he replied that under occupation of Zionist Israel, Palestine has exported goods of worth US$8 billion dollars and imported some US$14 billion goods and it was testament to the Palestinian rich economic potential that could benefit its brotherly and friendly countries.

Replying to another query, he said, “We are not isolating ourselves from the world rather connecting through culture and trade.” He informed that Palestine was part of 500 global organizations including Interpol, UN agencies, and other international bodies.

He thanked the government of Pakistan and the national leadership for their unwavering support to the Palestine Cause. The Ambassador remarked that Prime Minister Imran Khan, President Dr Arif Alvi, Foreign Minister Shah Mehmood Qureshi’s speeches and support for Palestine was unprecedented and especially the Prime Minister Khan’s speech at UN general assembly was highly commendable.

“All political parties and Parliamentarians chiefs including Senators came to the Embassy of Palestine to express solidarity with Palestinians that gave us enormous support and confidence that we do not consider ourselves alone in our just fight for freedom from Zionist Israel’s Occupation,” he said.

After reading Dr. Allama Muhammad Iqbal and Quaid-e-Azam Muhammad Ali Jinnah’s views and Pakistani government’s response including the Senate of Pakistan’s declaration to mark 22nd May as Palestine Solidarity Day made us feel that Palestinians are not alone,” he added.

On the query pertaining to defence cooperation by Pakistan, he said over thousands of soldiers had graduated from Pakistan Military Academy (PMA) Kakul along with hundreds of fighter pilots graduated and trained in Pakistan. Ahmed Rabel appreciated Pakistan’s unflinching stance on Palestine cause and assistance to the oppressed Palestinian brethren facing Zionist Israeli occupation and oppression.