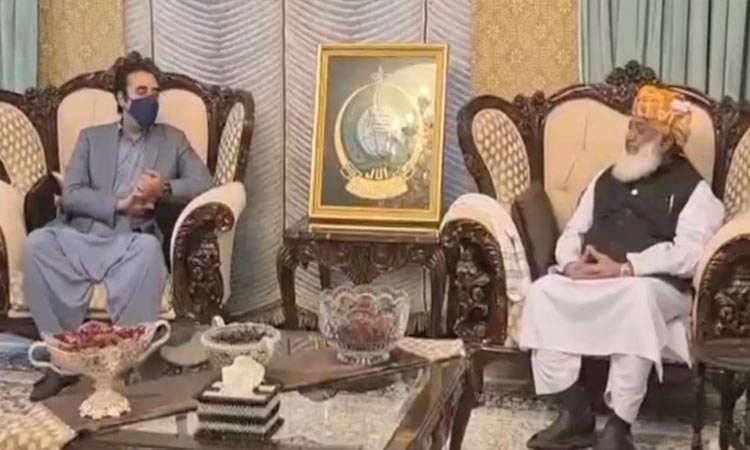 The PPP chief visited the JUI-F emir at his residence in Islamabad to inquire about his health and discuss matters related to the current political situation. During the ‘ice-breaker’, both leaders expressed concern over the rising inflation in the country.

“Joint action in parliament on EVM and accountability laws can lead to more successes. The government’s policies can only be foiled through the parliament,” Bilawal was quoted as saying during the meeting. He said the recent defeats of the government in the parliament were major achievements for the opposition.

Later, during a joint press conference, Bilawal said that the government, nowadays, is “facing defeat everyday”. “The government was unsuccessful in introducing its own bill in the National Assembly and the opposition were able to introduce their bill,” he said. “Another victory for the joint Opposition is the overnight cancellation of the joint session of Parliament,” he said. “The prime minister was forced to run away from a joint session of Parliament,” he remarked.

The PPP chairman said that the opposition had thwarted the government’s efforts to bulldoze legislation on the National Accountability Bureau ordinance and electronic voting machines and will be successful in the future too. “We must all welcome this victory of the joint opposition in parliament,” he said.

Bilawal said that the opposition had dealt the government a defeat through the use of democratic conventions. “The entire opposition was united and strong in parliament,” he said, adding that this is what the people expect of it as well. He noted that long-held ties have existed between the PPP and JUI-F, saying that his party works with Fazlur Rehman’s son, Asad Mahmoos, in parliament. “We have ties with Fazlur Rehman and these shall always remain,” he said, adding that ups and downs are part and parcel of politics.

Speaking on the occasion, Fazl ur Rehman said the opposition is playing a united role in the parliament in light of the difficulties being faced by the nation. He said the government has no right to carry out electoral reforms.

“Whatever their suggestions are, we are not ready to accept them at any cost. If it (government) carries out legislation through a false majority then we will liken it to a dictatorial action – this is not the way of the parliament,” he emphasised. Questioned on the PPP potentially returning to the PDM or supporting a no-confidence motion against the government, both Bilawal and Fazl said those issues had not been discussed in the meeting. “We all should welcome that the parliament has won. The united opposition has dealt a loss to the government in parliament through democratic means and this has always been our stance that work is done and successes achieved in a democratic manner,” Bilawal responded.

FazlurRehman said that he has maintained ties with Bilawal’s family for three generations. Echoing Bilawal’s sentiments he said that the Opposition is playing a united and joint role in Parliament. “The opposition’s unity is reflective of the need of the time and what the people want,” he said. “This fake government has come through rigging. It does not have the right to introduce reforms,” the JUI-F chief said, adding that the opposition “will not under any circumstance accept any recommendations regarding reforms”. “If they forcibly legislate using a fake majority, it will be interpreted as a dictatorial act,” he said. He, too, viewed the calling off of the joint parliament session as the government being forced to “run away”. “Let us see now what moves they make, where they make their buys from,” he remarked, adding that if a session is convened once more, the government will be “pushed back”.

He said that although he is the PDM chief, he will not take any decisions alone. To a question over whether the prime minister will be ousted through parliamentary action or whether general elections will take place, FazlurRehman said, “Our foremost demand since day once has been fresh general elections.”