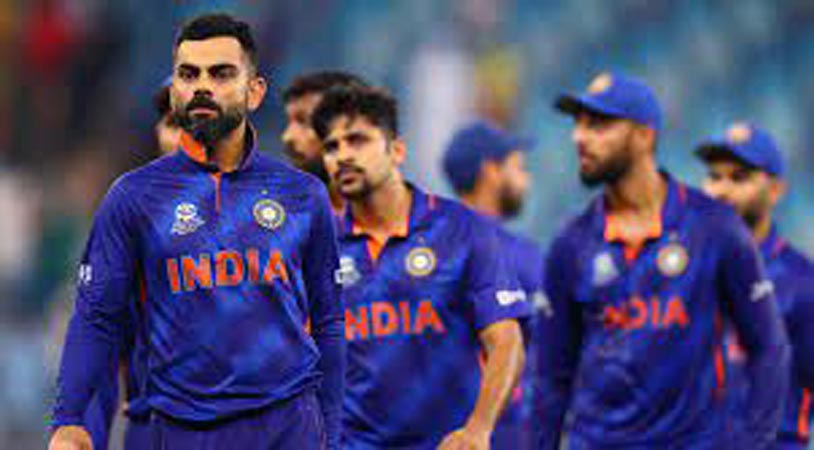 DUBAI: Virat Kohli’s India faced a social media onslaught on Monday after their second defeat at the Twenty20 World Cup left them needing a miracle to reach the semi-finals.India started the tournament as one of the favourites but heavy defeats to arch-rivals Pakistan and New Zealand have seen their hopes nosedive. A look at where India went wrong and the fallout they are suffering now:

Social media backlash: Angry India fans have slammed the team and national board chiefs while many blamed the cash-rich Indian Premier League (IPL) for the 10-wicket hammering by Pakistan and eight wicket mauling by New Zealand.#BanIPL became a leading Twitter hashtag on Monday among fans targeting the role played by the world’s richest T20 tournament that only finished in Dubai a few days before the World Cup started there.”It’s all about ‘money’, not ‘country’ #BanIPL,” said Gaurav Goel a state spokesperson for the ruling Bharatiya Janata Party on Twitter. Others targeted Board of Control for Cricket in India secretary Jay Shah and captain Kohli.

Batting flop: India’s famed batting line-up limped to a modest 110-7 against New Zealand on Sunday, a week after they managed 151-7 against a tough Pakistan attack.Top batters KL Rahul and Rohit Sharma showed little fight and even though Kohli made 57 against Pakistan, the totals proved insufficient.Against New Zealand, Rahul fell to Tim Southee for 18 and Sharma — who was dropped on nought— was out to IshSodhi after making 14. Kohli managed nine off 17 balls before Sodhi claimed his wicket.”Tentative with the bat, their shot selection was questionable,” batting great VVS Laxman wrote on Twitter. “New Zealand bowled superbly, but India made their task easier.”India must now beat Afghanistan on Wednesday and hope that New Zealand lose a game to stand a chance of reaching the last four.

Worrying trend: India made two changes from their defeat by Pakistan including bringing in opener Ishan Kishan. However, the left-hander fell to pace bowler Trent Boult while trying to go for a big shot and got caught for just four.Sodhi took Sharma and then Kohli to put India under pressure in the crucial six overs of powerplay.Tottering at 48-4, the Indian survived their 20 overs, but New Zealand overhauled their modest target with 33 balls to spare.”I don’t know if it is a fear of failure but I know that whatever changes they made to the batting order today did not work,” said former India captain Sunil Gavaskar.Pace bowler JaspritBumrah said “bubble fatigue, mental fatigue” creeps in after days on the road, but former players were unforgiving. GautamGambhir said India lacked “mental toughness”.

Weight of expectations?: MS Dhoni, now the team mentor, led India to the T20 World Cup crown in 2007 and the 50-over World Cup four years later.Kohli, who will step down as T20 captain after this tournament, took the team to a historic Test triumph in Australia.They also lead England 2-1 in their Test series, which will be brought to a climax in July next year after the final test had to be postponed due to concerns over the spread of Covid in the Indian camp.Kohli, though, has failed to win a World Cup.India lost in the semi-finals at the 2019 World Cup as they did at the last T20 World Cup in 2016 under Dhoni.Kohli faces mounting questions about the team’s handling of major tournaments but he has few excuses.