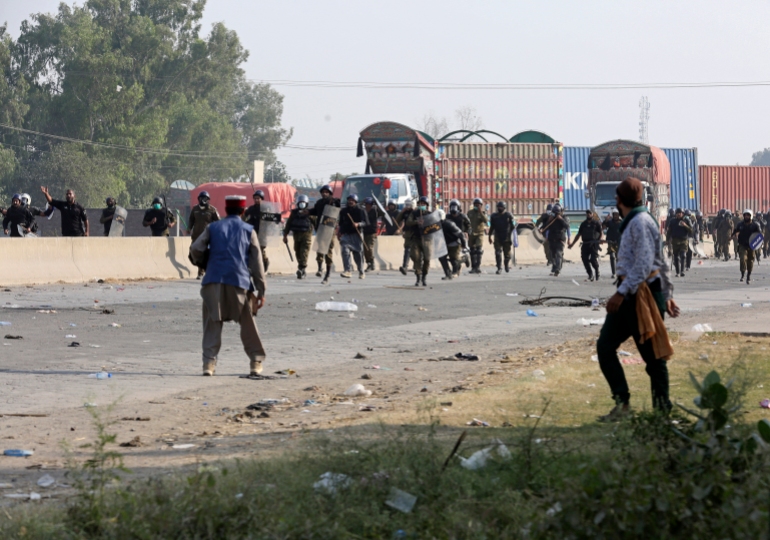 ISLAMABAD: Blocking roads, damaging public property was totally in negation to the teachings of the Holy Prophet (SAW) as he emphatically advised the Muslims to create ease and comfort for others.

Leading Ulema, religious scholars from all walks of life in an apparent reference to the long march of banned Tehreek-e-Labbaik Pakistan (TLP), said that achieving success for any cause was impossible by adopting violent means and causing discomfort to the people. Ruet-e-Hilal Committee Chairman Maulana Abdul Khabeer Azad said holding protest was the right of everyone but creating havoc on city roads such as traffic jam, road blockage, and loss to public property and life was prohibited in Islam.

Acknowledging the right to protest, Azad, who is khateeb of Jamia Badshahi Masjid Lahore, urged the Tehreek-e-Labbaik Pakistan (TLP) protestors to present their demands in a way as prescribed in the constitution of Islamic Republic of Pakistan. “Love and affection for the Holy Prophet (SAW) was part of our faith, and respecting each other was also advised by the Holy Prophet (SAW),” he added.

Khateeb, Jamia Masjid, Umer Bin al Khitab, Lahore, Maulana Zubair Ahmed Zaheer said the Holy Prophet (SAW) commanded people to create facilities for others and not to create difficulties for them. It should be understood that success cannot be achieved by fighting or damaging property or blocking the roads.

Holy Prophet Hazrat Muhammad (SAW) had removed the obstacles from the roads. The sayings of the Holy Prophet (SAW),” if even a stone is lying in the path, then someone should remove it with the intention of not harming the people, then Allah will grant Paradise in return.”

Principal of Minhaj-ul-Hussain University, Johar Town, Dr. Allama Muhammad Hussain Akbar said every Muslim was duty-bound to protect the life, property, and honor of others. He said the definition of a Muslim was that another Muslim should be safe from his tongue and hand, while the love of homeland was part of faith.

Khatib of Jamia Masjid Data Darbar, Lahore, Mufti Muhammad Ramzan said it was the faith and constitutional requirement of every Muslim to go out and move forward for the honor of the Holy Prophet (saw) in the objective conditions that the dear homeland was going through. To achieve this goal, issues should be settled amicably as coexistence, tolerance, love, peace, and sincerity was the symbol of being the best citizen, the best nation, and the best leader.