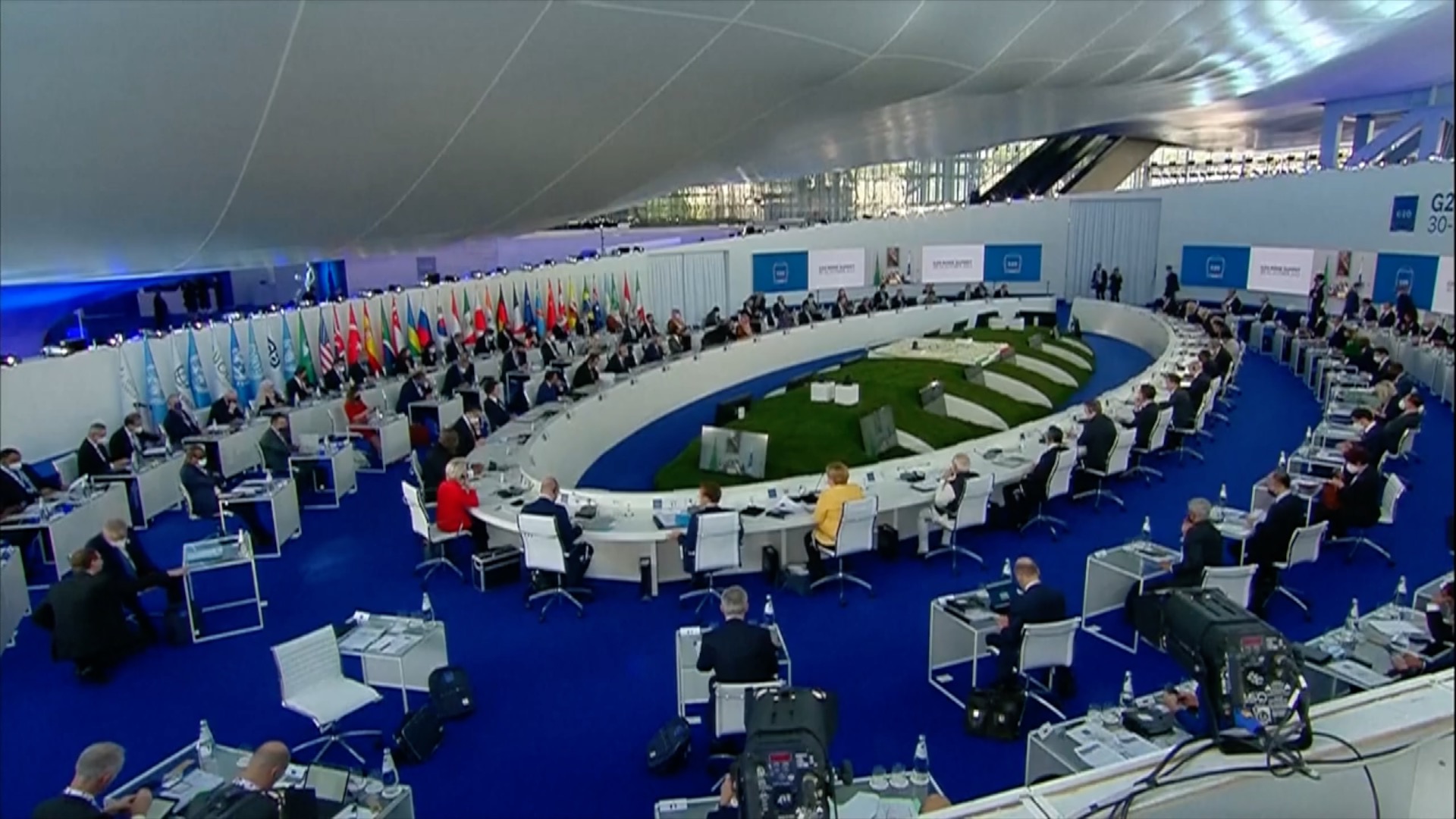 Leaders of the world’s most advanced nations met Saturday at the G20 summit in Rome hoping to hammer out a way forward on climate change and vaccine equality, with consensus still outstanding on the most pressing global issues.

In their first in-person gathering since the start of the Covid-19 pandemic, the relaunch of the global economy will also be front and center on the two-day agenda, while the bloc is likely to approve a minimum tax rate for the biggest multinationals.

But looming over the talks is pressure to make headway on tackling global warming before they join a wider group of world leaders gathering for the COP26 climate summit in Glasgow, which starts on Sunday. “From the pandemic to climate change, to fair and equitable taxation, going it alone is simply not an option,” G20 host and Italian Prime Minister Mario Draghi told the assembled group of leaders ahead of the closed-door meeting.

G20 heads of state arrived Saturday morning at Rome’s futuristic convention center known as the “Nuvola” (cloud) in EUR, a southern Rome district built by Benito Mussolini to glorify his fascist regime, posing with frontline health workers in a group photo. The stakes are high, with United Nations Secretary-General Antonio Guterres warning G20 leaders Friday to show “more ambition and more action” and overcome mistrust in order to advance climate goals. To be seen is whether the richest countries will agree to the goal of limiting global warming at 1.5 degrees Celsius above pre-industrial levels, the most ambitious target outlined in the 2015 Paris Agreement on climate change.

Draghi and other EU leaders had hoped to arrive in Glasgow with a commitment in hand on that key threshold, as well as consensus on a mid-century target to reach carbon neutrality. “There are two debates in parallel: should we increase our common ambition on the G20 level, strengthening the goals on climate neutrality and also what are the concrete goals?” “I understand for some countries dependant on coal it is difficult to accept,” Michel said, a veiled reference to China, the world’s largest polluter and the biggest user of coal.

Complicating the task for the G20 are considerable disparities between top world powers, from China, whose latest emissions-cutting plan has disappointed environmentalists, to Brazil, which insists on being paid to protect its share of the Amazon. While Chinese President Xi Jinping and Russia’s Vladimir Putin did not travel to Rome, attending only by video link, US President Joe Biden hopes to revive his country’s leadership on the world stage following the tumultuous Trump years.

Yet the Democrat faces a credibility test as his signature climate policy — part of a sweeping economic package is held up amid infighting within his party in Congress. Biden met Friday with Pope Francis and then French President Emmanuel Macron, where he admitted that Washington had been “clumsy” in its handling of a submarine deal with Australia and Britain that left Paris out in the cold.

Later Saturday, Biden will meet Macron, German Chancellor Angela Merkel, and British Prime Minister Boris Johnson for talks on Iran, after Tehran said it would resume discussions with world powers next month on reviving the 2015 nuclear accord.

Security is tight in Rome following violent protests earlier this month over the extension of Italy’s coronavirus pass to workplaces, and a climate march is expected in the city later in the day. Johnson the host of the UN climate summit next week warned that neither the G20 nor the COP26 meetings could stop global warming, and “the most we can hope to do is slow the increase”.

A surer bet for concrete progress at the G20 involves taxation, as the group is expected to endorse the 15 percent minimum international tax rate on multinational companies after nearly 140 countries reached an OECD-brokered deal. The move seeks to end tax optimization, in which global corporations — including big US tech firms such as Apple and Google parent Alphabet — shelter profits in countries with low-tax systems.

The OECD says a 15 percent global minimum corporate tax rate could add $150 billion annually to global tax revenues. No new pledges are expected to address the vast gap in Covid-19 vaccine access between rich and poor countries. But Draghi said the G20 should “do all we can” to meet a WHO goal of vaccinating 70 percent of the global population by mid-2022.