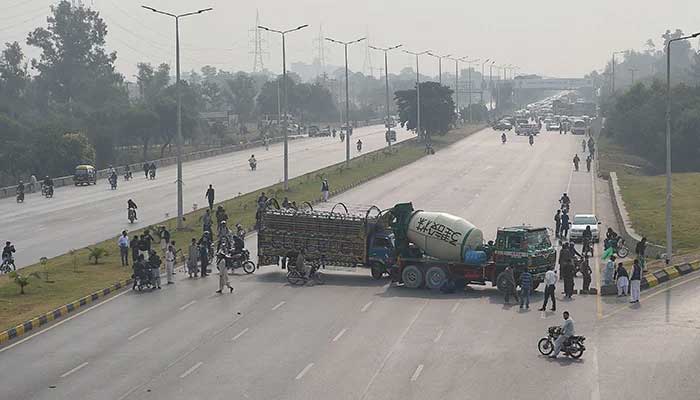 Administration has suspended the Metro Bus service in Rawalpindi. It has blocked roads in Islamabad and Lahore. The government braces up for protests organised separately by a banned outfit and Opposition parties in the above-mentioned cities.

Previously, Interior Ministry had written to the PTA to suspend internet services in Lahore due to a banned outfit’s protest.

Containers have also been placed at various points in Lahore. They are placed at the Samanabad turn at Multan Road and at the Grid Station Stop. Administration also has placed containers at the Dubai Chowk in Iqbal Town’s Boulevard area to thwart protesters’ attempts at assembling.

Meanwhile, Islamabad Traffic Police have also issued a traffic plan as the city braces to deal with protests today.

Administration has said that the Metro Bus will only operate from the IJP Road Stop to the Pakistan Secretariat. Whereas, it will remain suspended from Saddar to Faizabad.

The Islamabad administration has braced up security measures to deal with the banned outfit’s intended long march to the city. The city’s traffic police have also called on citizens to use the 9th Avenue. Those who want to traveI to Rawalpindi from Faizabad should use the IJP Road.

“We have closed Faizul Islam Stop, Murree Road for traffic,” said an ICT spokesperson. “Those who intend to travel from Islamabad to the Murree Road should instead take the Islamabad Highway.”

We have also sealed  the Jinnah Avenue road from Express Chowk to D-chowk, said the spokesperson. He added that citizens should use NADRA Chowk and Ayub Chowk to enter and exit the city’s Red Zone area.