* Farrukh says petroleum prices jumped from $35 to $85 per barrel, making it impossible for economy to bear the increase 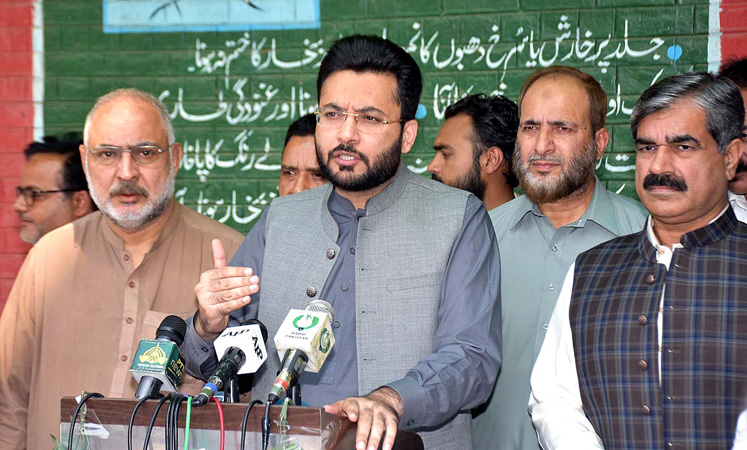 State Minister for Information and Broadcasting Farrukh Habib said on Saturday the government was trying its level best to minimise the impact of global inflation on poor people by trimming down duties and other taxes.

Talking to the media after chairing a seminar regarding “Ashra-e-Rehmatullil Aalameen” in Faisalabad at Govt Model MC Girls Higher Secondary School Samanabad, he said that although Covid-19 pandemic wreaked havoc on the economy of entire world with Pakistan also affected due to rise in prices of various commodities especially oil products, yet the country’s economy had witnessed growth due to prudent policies of the government.

He said that petroleum prices suddenly jumped from 35 dollars to 85 dollars per barrel and it was impossible for the economy of the third world country to bear the increase. “However, we are trying to control the inflation on sustainable basis and in this connection, long term policies are being implemented to enhance the export with diversification”, he said. The minister added that the government was also focusing on new and traditional markets so as to give quantum jump to the exports.

He said the rise in oil prices had affected all developed countries, therefore, the government had to take steps for rationalizing the price gap and some increase was made in the prices of oil products. However, the government reduced the sales tax on petrol in addition to decreasing petroleum levy to save people from inflation crunch at maximum extent, he added. He said the price of coal had increased from 50 dollar per tonne to 250 dollars per tonnes while price of edible oil had risen from 500 dollars per tonne to 1200-1300 dollars per tonnes at international market. At the same time, the charges for container shipping were also increased from 2000 dollars to 8000 to 10,000 dollars, he added.

The minister said the World Food Organization (WFO) said that corona pandemic had caused the worst inflation in the world since 1970s, and Bloomberg had also seconded it. However, despite all these odds, the PTI government tried its level best to provide every possible relief to the masses. In this connection, talks were also underway with the owners of ghee mills to bring down the prices of ghee for which the government was also ready for appropriate reduction in taxes and levies, he added.

The minister said the government would issue Ehsas cards to 12 million poor families in the form of ration cards from November this and the card holder would be entitled to get direct subsidy on flour, sugar, pulses and ghee.

Similarly, farmers were being provided Kissan cards at a fast pace so that they could increase their food production and meet their agricultural needs by getting direct subsidies, he said and added that from November this, health cards would also be issued to every family in Punjab so that card holder family could get quality up to Rs 1 million annually from the doctor or hospital of their own choice.

He said that pro-industry policies of the government had also increased production in addition to creating new job opportunities. The cotton crop has also increased from 6 million bales to 9 million bales which would be increased further in the coming years. Farrukh Habib said that this time by the grace of Allah Almighty, farmers had witnessed bumper sugarcane crops and its crushing season would start from next month, adding the government had chalked out a comprehensive strategy so that growers could get reasonable and timely prices of their produce.

The ill-conceived policies of previous rulers not only increased circular debt but also ruined the economic stability by looting and plundering national wealth through fake accounts and money laundering, he added.

Responding to another query, he said the PTI government would complete its constitutional tenure. He said that PDM (Pakistan Democratic Movement) was a bunch of politically unemployed persons and its politics of long marches, sit-ins and resignations had already died.