Loss of beauty in the forests of Murree 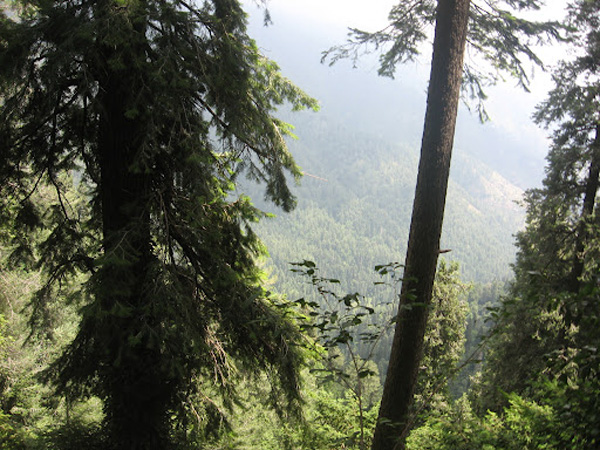 Murree, which is a notable mountain resort town situated in the Galiyat region of the Pir Panjal Range is surrounded by forests of trees known as chir pine, blue pine, deodar and spruce. The hills of Murree are deemed to be one of the multi-floristic site of Pakistan, and it is popular for tourism and natural marvel. The summer season, late spring and autumn especially present an alluring view of the pine and the conifer trees particularly glistening in the sunlight. The yellow-golden sun rays reflecting onto these trees portray a magical beauty, which even is further enhanced during rainy season.

It is indeed unfortunate to note that the beauty of the forests of trees in Murree is unlike as it existed a decade ago. The beauty of these forests has been under a threat of several human activities leading to a loss in biodiversity. Such human activities comprise deforestation, building more cottages, and buildings in the mountainous areas as well as increased tourism. These activities require cutting down the trees to clear the land for construction of residential buildings, huts and apartments for the local population and the tourists. Such activities lead to soil erosion, which adversely affect the growth of the trees and the plantation. In addition, the deforestation alarmingly results in climate change leading to lesser rain and snowfall than before.

Human activities are gradually depriving the mountains of Murree of their natural beauty, which has attracted tourists since long. Corrupt activities of timber mafia to draw away tourists from visiting these areas, thereby thwarting the prosperity of Murree’s tourism sector.

It will increase unemployment in the region and affect the related food and retail sectors the most. The loss of trees also means less oxygen transmission in the air and unhealthy environment for breathing in Murree.

Human activities are gradually depriving the mountains of Murree of their natural beauty, which has attracted tourists since long. Corrupt activities of timber mafia to draw away tourists from visiting these areas, thereby thwarting the prosperity of Murree’s tourism sector

The rate of deforestation generally has been estimated at 2.5 percent in the region of Murree. It is gradually diminishing the tall pine and conifer trees, and hence disturbing the scenic and relaxing atmosphere of Murree. The picturesque view of the area is tarnished and the environment is visible in brown and grey colours. Heaps of construction material derived from the wood and timber of the trees has covered the hills of Murree, which has ruined its splendour. Once these hills were covered with lush greenery and now heaps of mud, construction material and wood for establishment of infrastructure is seen on the once beautiful hills of Murree.

The growing population in Murree and adjoining Galiyat areas has polluted the forests there thereby reducing their charm. Litter, garbage and sewage disposal is commonly evident in the forests of trees of Murree. Such elements have ruined the charm of the forests of Murree. The marvel of feeling the crisp pine breeze amidst golden sunlight and hearing the sound of the morning birds in cool morning breeze make up a mesmerizing aura of the place. However, this subtle beauty of the mountains has been gradually depleted due to commercialization and other business activities in the region. The ecosystems of different species have been adversely affected, and the animals once predominantly seen in the forests of Murree have vanished.

In light of the grave scenario discussed above, there is an urgent need for the environmental agencies of Pakistan to preserve and maintain the natural beauty of the forests of Murree. Frequent collaborative meetings of the environmental and forest departments of Murree should be held to retain the biodiversity of the region. Tree plantation campaigns should be held on a larger scale in the region and importance of environmental conservation should be incorporated widely in the national curriculum of education.