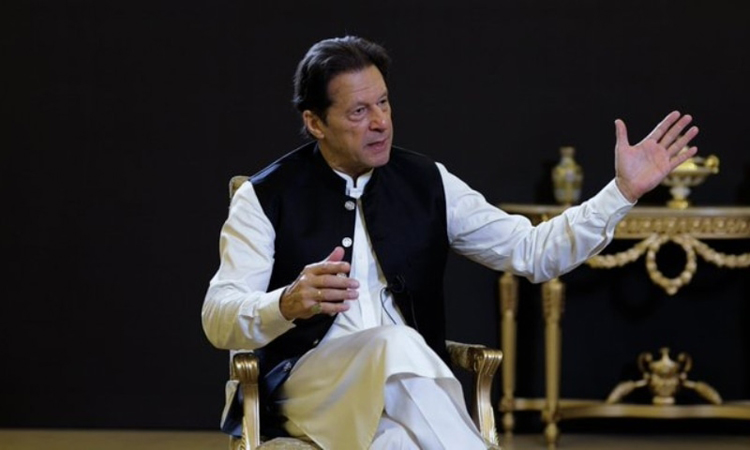 Prime Minister Imran Khan Monday asked the United States to ‘pull itself together’ or face the collapse of Afghanistan, which would become a haven of terrorists.

“It’s a really critical time and the US has to pull itself together because people in the United States are in a state of shock,” he told Middle East Eye, a London-based online news outlet, in an interview here. He said it was vital for Pakistan that the Washington steps up to the challenge else the former would have to pay heavy price having already sacrificed tens of thousands of people after joining the US-led ‘war on terror’. “They were imagining some sort of democracy, nation-building or liberated women, and suddenly they find the Taliban are back. There is so much anger and shock and surprise. Unless America takes the lead, we are worried that there will be chaos in Afghanistan and we will be most affected by that.”

He said two decades later the US had no other option but to do everything it could to support stable government in Afghanistan, because the Taliban are the only option for fighting Islamic State in the region – and to prevent the ascendency of hardline elements within the Taliban’s own ranks. The prime minister reiterated his call for the world to engage with Afghanistan because “if it pushes it away, within the Taliban movement there are hardliners, and it could easily go back to the Taliban of 2000 and that would be a disaster.”

He said sanctioning the Taliban would soon lead to a humanitarian disaster in Afghanistan where half the population already lived below the poverty line, and 75 percent of the national budget dependent on foreign aid. “If they leave Afghanistan like this, my worry is that Afghanistan could easily revert back to 1989 when the Soviets and US left and over 200,000 Afghans died in the chaos,” he said, referring to the civil war that followed the Soviet retreat from the country.

Imran khan told MEE that he had warned Biden, John Kerry and Harry Reid – then all senators – in 2008 that they were creating a quagmire in Afghanistan for which there was no military solution. He said they did not listen. Two years later General Ashfaq Parvez Kayani, then chief of the army staff, delivered the same message to US President Barack Obama, he added. “We have been so relieved because we expected a bloodbath but what happened was a peaceful transfer of power. But we also felt we were blamed for this. Three hundred thousand [Afghan army] troops surrendered without a fight, so clearly we did not tell them to surrender.”

Asked whether the Taliban had formed an inclusive government, Khan conceded it was not inclusive, but said the government was a transitional one. The prime minister said Pakistan was working with neighbouring states, notably Tajikistan and Uzbekistan, which had sizeable ethnic minorities inside Afghanistan, to encourage the Taliban to widen representation. “They need an inclusive government because Afghanistan is a diverse society.”

Imran Khan said the Taliban should be given time. “They have made the right statements and have no other option. What else are we going to do if we sanction them? The best way is to incentivise them to walk the talk. But if you force them, I would imagine the nature of the people is such that they will push back and it would be counterproductive.”

He said there were clearly different currents within the movement and a lack of clear leadership on some issues. He said the Tehreek-e-Taliban Pakistan (TTP) consisted of 50 groups and that he was trying to reconcile those elements who were willing to talk. “Now we are trying to talk to those who can be reconciled because it’s from a position of strength. I always believed all insurgencies eventually end up on the dialogue table, like the IRA [Irish Republican Army] for instance,” he said, referring to the Northern Irish peace deal.

The prime minister said that the Taliban government in Afghanistan had told Pakistan that the TTP would not be allowed to launch attacks on Pakistan from inside Afghan territory. He accused Indian intelligence of supporting these attacks under the former government in Kabul. “We now have to talk to those we can reconcile and [persuade to] give up their arms and live as normal citizens.”

Khan condemned the continued use of drones by the US in Afghanistan. “It is the most insane way of fighting terrorism. Doing a drone attack on a village mud hut and expecting there will not be casualties. And a lot of time the drones targeted the wrong people.”

Asked whether Pakistan would allow the US to launch strikes targeting IS in Afghanistan from Pakistan, Khan said, “They don’t need a base here because we do not need to be part of a conflict again. No country paid such a heavy price as us. Eighty thousand Pakistanis died. The economy was devastated. $150bn was lost to the economy. It was called the most dangerous place on earth. Three-and-a-half million people were internally displaced.”

Khan said it was too early to say what the regional effect of the US withdrawal would be. But he said China was the emerging power that would step into the vacuum and had stood by Pakistan during its darkest recent days. “Who was the country that came to help? We were going belly up. It was China that helped us. You always remember those who help you in the difficult times.”

Discussing the human rights situation in Indian Illegally Occupied Jammu and Kashmir (IIOJK), the prime minister said India enjoyed the same kind of impunity within the international community over its attempts to change the demographic balance of Kashmir that Israel has in the occupied Palestinian territories. He said Narendra Modi was copying Israel by allowing settlers to acquire land in the disputed territory.

Calling IIOJK an open prison, he said India was breaching the Geneva Convention by changing the Indian constitution to end Kashmiri autonomy. The prime minister said India had not been challenged more forcefully on the international stage because its western allies saw it as a bulwark against China. But he said India had also benefited from a deepening strategic and military relationship with Israel, forged by Modi’s visit to the country in July 2017, and by then-Israeli Prime Minister Benjamin Netanyahu’s return visit to India the following year.

Asked as how volatile the current situation was, Imran Khan replied: “If you look at the flashpoints, probably the nuclear flashpoint right now in the world is Pakistan-India because nowhere else is there a situation where there are two nuclear-armed countries who have had three wars before they were nuclear-armed.”