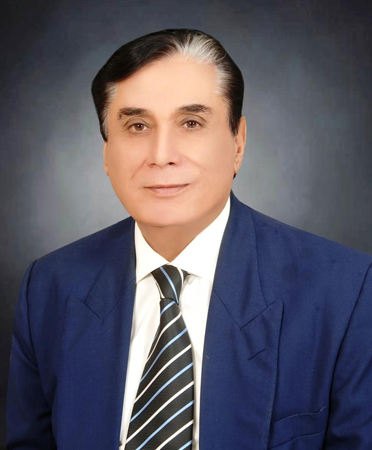 Corruption is a scourge that not only hinders poverty and the socio-economic development of a society but also affects almost all the countries around the world.

The NAB, as Pakistan’s focal organisation under the UN Convention against Corruption, is committed to eradicating this menace of corruption and making Pakistan corruption-free by adopting a “accountability for all” policy.

The NAB, as the apex anti-corruption body, has been entrusted with the task of eradicating corruption, for which the NAB is fulfilling its responsibilities under a three-pronged strategy of awareness, prevention and enforcement.

The National Accountability Bureau (NAB) has been working tirelessly to eradicate this scourge from the society through its multi-pronged strategy, which is beginning to yield remarkable and excellent results.

The NAB has been set up to eradicate corruption and recover money looted from corrupt elements and subsequently deposit it in the national treasury. Honourable Justice Javed Iqbal, after assuming his responsibilities as Chairman NAB, not only introduced a comprehensive and effective anti-corruption strategy but also introduced various initiatives which are beginning to yield excellent results. It is an honour that leading reputable national and international organizations such as Transparency International Pakistan, World Economic Forum, Global Peace Canada, PILDAT and Mashal Pakistan not only appreciated NAB’s efforts to eradicate corruption, but Gilani and Gallup survey revealed that some 59% of people has expressed confidence on NAB.

Under the dynamic leadership of Justice Javed Iqbal, NAB has become a vibrant institution today. The bureau has directly and indirectly recovered Rs.539 billion from corrupt elements which is a record achievement as compared to previous years.

The NAB has received 501723 complaints since its inception out of which 491358 complaints have been disposed off.

NAB has authorized 10297 inquiries out of which 9260 inquiries have been completed.

The National Accountability Bureau has authorised 4693 complaint verifications,out of which 4353 have been completed by NAB.

NAB has recovered Rs. 819 billion directly and indirectly since its inception.

The NAB has filed 3760 references in various honourable accountability courts, out of which the decisions of 2482 references have been pronounced by those courts.

Right now, some 1278 references worth Rs. 1335.019 billion are pending in various accountability courts.

NAB has been elected first chairman of SAARC Anti-Corruption Forum. NAB has signed a memorandum of understanding with China to monitor CPEC projects in Pakistan.

NAB has introduced a new concept of Combined Investigation Team to benefit from the experience and collective wisdom of senior supervisory officers and to further improve the quality of inquiries and investigations based on solid evidence and statements.

NAB has established a state-of-the-art forensic science lab, as well as digital forensics, which has multiple questionnaires and fingerprint analysis facilities.

These steps of NAB are its standard. NAB has developed a comprehensive quantified grading system along with monitoring and evaluation system. So that the performance of NAB under the leadership of Justice Javed Iqbal could be further improved.

According to the NAB’s enforcement strategy, the NAB, headed by its chairman Justice Javed Iqbal, set a time to complete the investigation itself and later file a reference on corruption and corrupt factors.

The NAB has also set up evidence collection cells in all its regional bureaus.

For this reason, the NAB is pursuing its cases in the courts in accordance with the law on the basis of solid documentary evidence and has a combined conviction rate of about 66%.

NAB’s indiscriminate steps under the leadership of Chairman Justice Javed Iqbal have multiplied the prestige of NAB.

Because the purpose of NAB is to nab corrupt elements and deposit the looted money in the national treasury. This is the result of the hard work of all the officers and staff of the NAB and the fight against corruption is being carried out as a national duty.

Justice Javed Iqbal has 40 years of experience in providing justice to the citizens. He started his career as a Sessions Judge of Quetta and served as the Chief Justice of the Supreme Court of Pakistan.

Justice Javed has an unparalleled and balanced personality with honesty, dignity and respect.

The instructions of the Chairman NAB are being followed in all the regional bureaus.

NAB believes in eradicating corruption by ensuring accountability to all while abiding by the law.

The excellent performance of NAB during the last 4 years under the leadership of Chairman NAB has yielded results.

We must play a collective role in the fight against the cancer of corruption that is severely damaging the moral values of our society. We must leave the best and prosperous Pakistan for the new generation.