Pakistan urges UNHRC to ‘stand up’ for Kashmiris 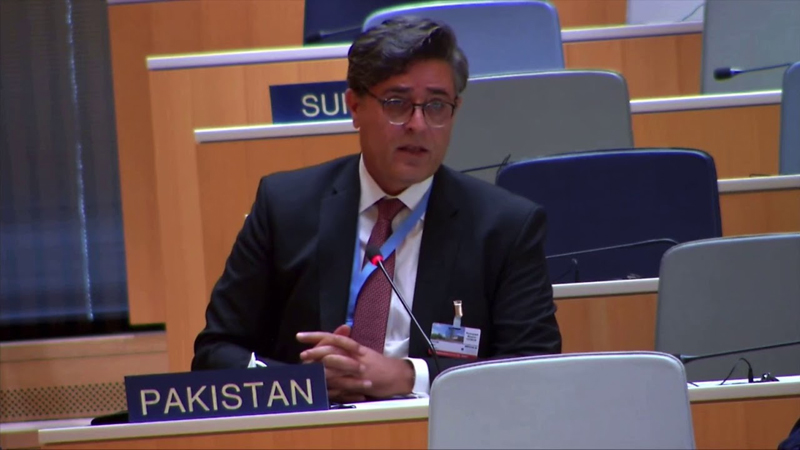 Pakistan has called on the UN Human Rights Council to “speak and stand up” for people struggling to free themselves from occupation, including Kashmiris, and to realize their right to self-determination.

Speaking in the 47-member Council, Ambassador Khalil Hashmi, the permanent representative of Pakistan to the UN offices in Geneva, said that the human rights situation in the Illegally Indian Occupied Jammu and Kashmir (IIOJK) had gone from bad to worse following India’s annexation of the disputed territory on 5 August 2019.

Ambassador Hashmi was speaking in a debate during which implementation of the Vienna Declaration and Programme of Action (VDPA) was reviewed.

VDPA provisions, he pointed out, are unequivocal that foreign occupation was a systemic obstacle to realization and enjoyment of basic rights, adding that such UN-recognized situations constituted “hotspots of gruesome atrocities, being fed by pervasive impunity afforded to occupation regimes.”

“The nexus between the deplorable human rights abuses, Indian occupation and its illegal demographic changes in occupied Kashmir, is just one case in point,” the Pakistani envoy said.

India, he said, had scaled up its suppression of the Kashmiri people flouting all fundamental human rights norms, principles and international law, with death in every neighborhood, as Indian forces continue to terrorize, summarily kill, and demolish homes with full impunity.

“In imposing a ‘final solution’ through military force, the Hindutva regime is systematically disenfranchising the Kashmiri people of their right to freely pursue their socio-economic and cultural development,” Ambassador Khalil said.

Kashmiri lands, property, and natural resources were being doled out to non-Kashmiri Indian entities, and administrative rules eased for Indian army to illegally grab lands.

Despite mounting unemployment caused by the world’s longest running military siege, local jobs have been opened for foreign settlers, he said. India had also changed the status of Urdu and Kashmiri languages associated with Muslims, and their identity.

“The ultimate aim of India’s illegal steps is to make the Kashmiri majority into a minority in their own homeland, and to prevent them from exercising their right to self-determination,” the Pakistani envoy said, urging the UN human rights machinery, civil society and global media to continue to chronicle these signs.

“We once again call on India comply with its obligations under international law by reversing its illegal actions taken since August 2019 and uphold fundamental rights of the Kashmiri people, in particular their inalienable right to self-determination.”