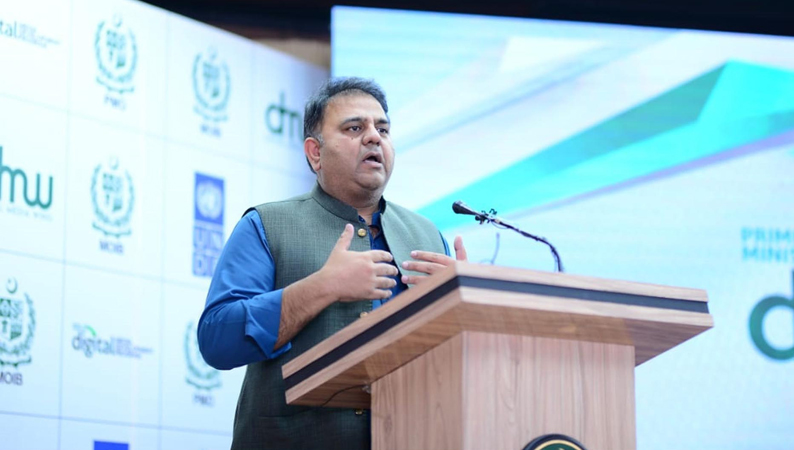 Minister for Information and Broadcasting Chaudhry Fawad Hussain on Friday said that Prime Minister (PM) Imran Khan was at top among the personalities getting highest ‘media hours’ due to the reforms introduced by the ministry to meet the challenges of digital era for effective projection of state narrative.

“Today, Prime Minister Imran Khan is on the cover page of news week [An American weekly magazine]. Two days back, his interview on RT [Russian TV] was aired in over 100 countries and communicated in seven languages,” he said, while addressing the inauguration ceremony of Digital Media Internship Programme.

“All of this is happening due to the prudent strategy of PTI government which has realized that real war today is the war of narrative,” he added.

The minister said the reform process, which was carried out by the present government in ministry of Information and Broadcasting, was initiated in 2018 and producing desired results.

He said the Digital Media Wing (DMW) was set up in 2020 at the ministry which had completely transformed the state’s narrative. Youngsters like Dr. Arslan, who is also Focal Person to the Prime Minister Digital media, was inducted in the DMW which has been performing upto the mark, he added.

He said the ministry had digitalised the Associated Press of Pakistan and transformed the PTV into HD television, whereas the Radio Pakistan’s app was among the best applications on the internet and producing remarkable results in enforcing the state’s narrative.

Prior to the Pakistan Tehreek-e-Insaf government, the minister said he realised that there was a big difference between the party’s media wing and the state’s. The PTI media was performing better than the latter, he added.

During the past regimes, he said the state media acted as mouthpiece of the party in the power, instead of representing the state’s narrative.

Recalling the bleak state of human resources during his visit to PID Karachi, the minister said out of total 62 employees, only one person had master degree while three with BA degree and rest were matriculate.

Fawad said that he later requested Prime Minister Imran Khan for transforming the state media on the pattern of the PTI’s media wing which the PM graciously agreed.

Lauding the sagacity and acumen of Prime Minister, Fawad said he had foreseen that the future only belonged to digital media. Prime minister, the true representative of the youth, had realised the power of people’s opinion.

Prior to PTI coming into power, the minister said performance of state media departments was not upto despite hefty budgetary allocations.

The major reason was that the past rulers did not realise importance of the public diplomacy as they only preferred to develop personal relations at state levels, just for laundering the money, he noted.

He said since India had imposed hybrid war on Pakistan, so there was a need for induction of qualified human resource in the state media departments.

He said the Ministry of Information and Broadcasting was planning to impart an extensive digital media training to some 5,000 people in collaboration with 42 journalist institutes to help boost awareness about the digital media at state level. Fawad said some 28,000 applications had been received for two seats in PTV, while counting of applicants for filling multiple seats in APP was underway.

He said there were some 42 journalism teaching institutes in the country. Unfortunately, the courses being taught in these instituted have not yet been updated. The government was planning to change the courses of these institutions to meet modern day needs.

He said even his ministry’s gazetted officers do not have much knowledge about the digital media. However, the ministry had already started teaching its information officers about digital media.