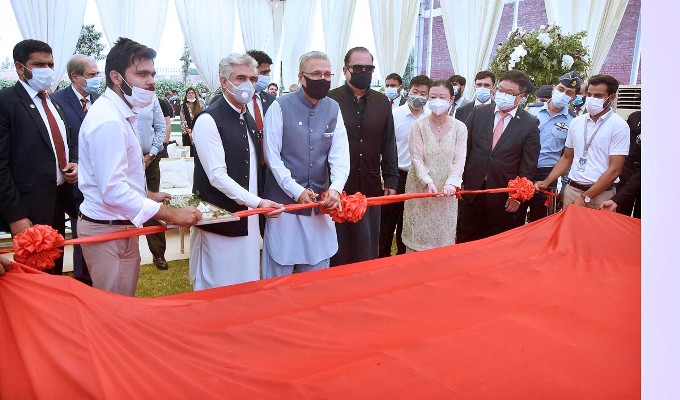 LAHORE: President Dr. Arif Alvi on Friday said the government was ensuring ‘ease of doing business’ for attracting maximum foreign investment as revolutionizing the industrial sector was vital for the uplift of the country.

He was addressing after inaugurating ‘Challange Textile Park’ a project launched by the Chinese with an investment of about $150 million, at Challenge Textile here. He said such initiatives like Challenge Textile Park would help in attracting further investment as it was needed to continuously learn for exploring new ways of bringing foreign investment. Special economic zones were being established, he said. The world was changing and no one can economically isolate a country, he added.

The President said Pakistan-China relationships were of paramount importance for bringing development and prosperity in the region. “We invite Chinese to come here, invest and spread a message across the world about available business opportunities in Pakistan”, Alvi maintained. He said it was needed to focus on fast and prompt communication to resolve the issues of businessmen and Prime Minister Imran Khan-led government was working effectively to build more and more special economic zones for creating new employment opportunities and promote the industrial sector.

Pakistan as a brand, he said was emerging strongly and the government had achieved significant success in the macro-finance sector, agriculture sector, and overcoming Covid 19 pandemic. The President said that the world may not be completely free of Covid 19 virus due to its changing variants but efforts could be made to produce enough vaccines for developing immunity among people against the virus. Punjab Minister for Industries and Commerce Mian Aslam Iqbal, prominent businessman Qamar Khan Bobi, Chinese Consul General, and a large number of business representatives from China were also present.