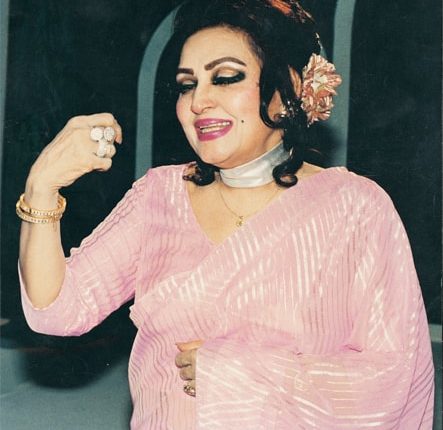 ISLAMABAD: Renowned cultural icon and one of the most legendary voices of Pakistan Malika-e-Tarannum Noor Jehan was remembered on her 95th birth anniversary to pay homages for her unfordable services for entertainment industry.

For more than 35 years, Madam Noor Jehan had ruled the film industry and sung approximately six thousand songs for Urdu, Punjabi and Sindhi films. Madam Jehan was not only a playback singer, but she was also a gifted ghazal singer.

For her acting and singing capabilities, Noor Jehan was awarded President’s Award in 1957. Noor Jehan’s real name was Allah Wasai and she was born on September 21, 1926 into a musicians family in Kasur,Punjab, electronic channels reported.

After partition, Madam Noor Jehan moved to Lahore from Bombay and started her film career in Pakistan as actress, singer and the first Pakistani film director, with “Chann Wey” in 1951. She recorded about 10,000 songs in various languages including Urdu, Hindi, Punjabi and Sindhi. She is known as one of the greatest and most influential singers of her time in South Asia and was given the title of Malika-e-Taranum.

During the Indo-Pak war of 1965, her soulful voice not only enthralled the soldiers on the front but also raised the spirit of patriotism among them and she received Tamgha-E-Imtiaz from Pakistan Army for Providing moral support to them in the days of the war. On this date in the year 2000, Madam Noor Jehan took her last breath in this world and died as result of heart failure. Her last resting place is in Karachi.