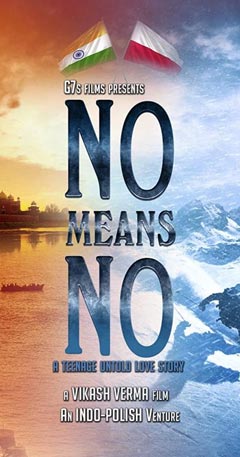 The film ‘No Means No’ is the first Indo Polish collaboration and is based on true stories revolving around women empowerment will hit the screen in cinemas worldwide on November 5 this year. The teaser of the film has crossed millions of views.

Preity G Zinta heaps best wishes for her friend Vikash Verma stating, “Wishing you all the very best for your movie No Means No and I really wish I was there to do something and I’m really jealous that I’m missing out on everything. But I really from the bottom of my heart wish you all the very best. And I’m sure the movie is going to be amazing.

Ronit Roy expresses his best wishes to his friend and director Vikash Verma stating, “I wanted to wish Vikash and Dhruv all the very best for No Means No. I saw the teaser and Dhruv has done so well. The movie is going to rock and I wish you’ll all the very best.”

Hollywood actor Steven Seagal who is a mentor to director Vikash Verma says, “I wish you all the success for your film No Means No and my blessings are with you. I’m always there for you as your Guru.”

Ajay Bisaria, High Commissioner of India to Canada adds, “I want to congratulate Vikash and the entire team of No Means No. I feel it’s a path-breaking film, a pioneering effort of joint Indo- Polish production, a love story with a message. It also underlines the cultural connection between both the countries and wish you all the success for this wonderful venture.”

Produced by G7 Films Poland, the snowy mountains and picturesque locations featured in the movie provide a glimpse into life in Poland and is likely to give a boost to the country’s tourism.