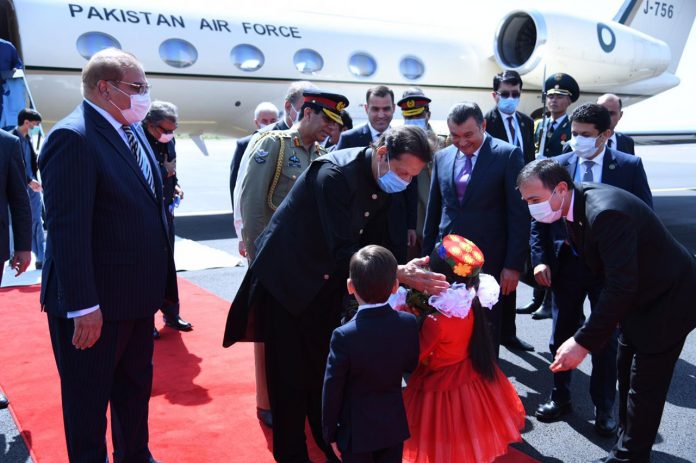 DUSHANBE (Tajikistan): Prime Minister Imran Khan arrived in Tajikistan’s capital Dushanbe on Thursday, where he will represent the the country at 20th Shanghai Cooperation Organization Council of Heads of State (SCO-CHS) Summit.

This is the third visit of the Prime Minister to Central Asia, underlining Pakistan’s enhanced engagement with the region. Minister for Information and Broadcasting Chaudhry Fawad Hussain giving details about the visit said it would prove a milestone in line with the government’s Vision Central Asia, aimed at promoting regional connectivity. He said the prime minister would not only present Pakistan’s stance at the SCO platform but would also meet several leaders of the region on the sidelines.

PM Imran Khan has earlier participated in SCO-CHS held in Bishkek, Kyrgyz Republic on 13-14 June 2019 and SCO-CHS hosted by Russia on 10 November 2020 through video-conference. The SCO, an eight-member permanent inter-governmental trans-regional Organization, was established in Shanghai on 15 June 2001. Pakistan became an SCO Observer in 2005 and a full member in June 2017 during Astana SCO-CHS Summit. Russia, China, India, Uzbekistan, Kazakhstan, Kyrgyz Republic, and Tajikistan are other SCO members.

The SCO also has four Observer states (Iran, Mongolia, Belarus, and Afghanistan) and six Dialogue Partners (Azerbaijan, Armenia, Cambodia, Nepal, Turkey and Sri Lanka). The prime minister will hold bilateral meetings with other participating leaders on the sidelines. “His talks with Tajik President will cover the entire gamut of bilateral relations, especially enhancing trade, economic and investment ties with a particular focus on regional connectivity,” the Foreign Office said. The two countries have earlier expressed strong commitment to enter into a formal strategic partnership.

The prime minister will inaugurate the first meeting of Pakistan-Tajikistan Business Forum for which a group of Pakistani businessmen is also visiting Dushanbe. “The Joint Business Forum will catalyze growing trade and investment relations and promote business to business contacts between the trading communities of both sides,” the FO statement added.

Vice President Sarhad Chamber of Commerce and Industries Junaid Altaf, who is part of the delegation of businessmen said, the aim of the visit was promotion of regional trade in line with the vision of Prime Minister Imran Khan. He mentioned that the earlier trip to Uzbekistan benefitted traders in numerous ways due to signing of several agreements and Memoranda of Understanding. Vice President Quetta Chamber of Commerce and Industries Akhtar Kakar said the prime minister’s decision to arrange a business delegation to Tajikistan would reap benefits in the form of strengthening of bilateral trade.

He said Pakistan’s economic prosperity was greatly linked with the promotion of trade activity.  Nazia Tauseef, a representative from pharmaceutical industry, said the visit would open up a new gateway of opportunities for several sectors including pharmaceuticals. She thanked the Commerce Ministry for facilitating the businessmen and traders in promotion of trade activity with regional countries. A meeting of Pakistan-Tajikistan Joint Business Council will also be held on the sidelines.

Pakistan and Tajikistan enjoy close brotherly relations underpinned by the bonds of common faith, history, and culture. The two countries have shared perceptions and a common desire to promote economic development, peace, security, and stability in the region.

The Prime Minister’s visit is part of Pakistan’s deepened engagement with Central Asia through ‘Vision Central Asia’ policy, having revitalized focus in five key areas of political ties, trade and investment, energy and connectivity, security and defense, and people-to-people contacts.