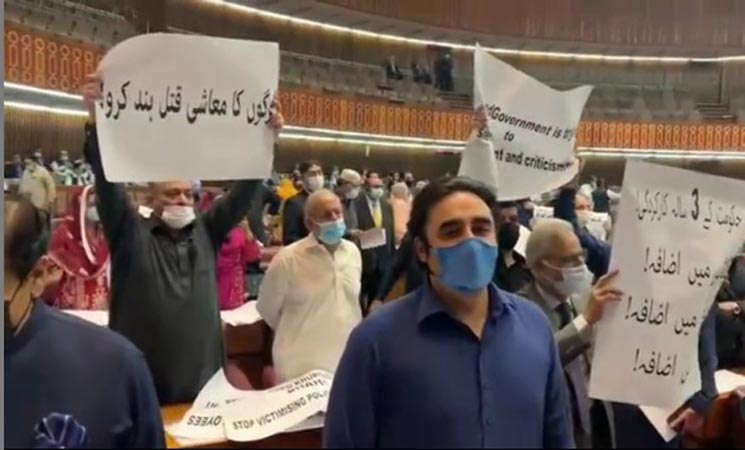 Pandemonium by the opposition parties on the occasion of president’s address to the joint sitting of the parliament at the advent of the new parliamentary year, unfortunately, has become a parliamentary norm in our country.

Instead of giving ears to the address, the opposition parties use the occasion to criticize the government’s policies, whilst the sitting president completes the written speech without giving any attention to the commotion.

Whilst the opposition this time too stuck to its conventional approach, President Arif Alvi, however, in a clear departure from previous practice, sporadically, responded to the opposition parties’ rumpus and advised them to give him a patient hearing. “The people in their homes are grasping his speech very well but those sitting in the parliament must also comprehend it.”

The president commenced his address with the wish that democratic values and tradition of tolerance flourishes in the country. While he was enumerating the achievements of the government on the economic front amidst the sloganeering of the opposition, he said, “Despite you making noise, you will have to accept the reality.”

In another occasion, when the opposition was raising slogans that ‘bullying and intimidation’ on the party of government will not be allowed, the president responded that it is relief in taxes that has been allowed so that the people can build their houses. Whilst mentioning that the government is fully cognizant of the fourth industrial revolution taking place in the world, the president said that this cannot be stopped by resorting to hue and cry. “If you give ear to some of my remarks, these will make their way to your hearts and minds”.

In another apparent reference to the opposition parties, the president said the present government is spending on the welfare of masses instead of plundering the country. Whilst emphasizing the need for use of EVMs in the general elections, the president also advised the opposition parties not to do politics on it. “I am requesting not to make it a political football it is related to the country’s future.”