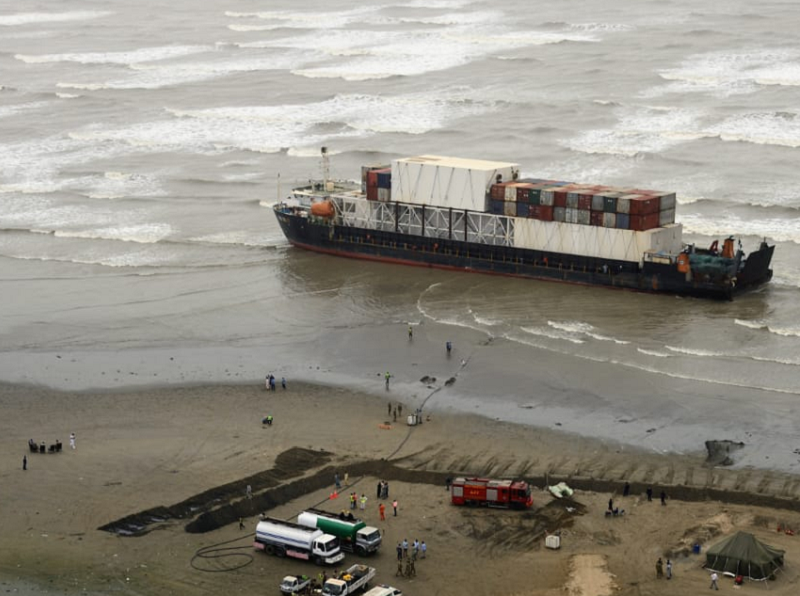 KARACHI: After multiple efforts to refloat grounded cargo vessel (MV) Heng Tong 77 that has been stuck on the Karachi coast since July 20, the salvage master recently commissioned to extricate the ill-fated ship and has successfully put it back into the sea.

At the time of publishing this news, the ship has already been 2000 meters into the sea from the coast where it was stranded in July. Special Assistant to Prime Minister on Maritime Affairs Mahmood Moulvi said since the ship has been refloated and is now in safe waters, it will be taken into custody for a further investigation.

He said although the refloating endeavor took a fortune for the cost, the entire bill was footed by the ship owner and none by the government. Earlier in the morning it was reported that the attempt to extricate the stuck cargo ship at the Seaview beach has so far achieved a 100-meter distance with three strong tugging ropes fastened to pull it back.

The fresh attempt today has been carried out with the help of an expert salvage master, two crane barges and two tugs. The previous attempt in August failed due to the inexperienced teams and frail and old pulling ropes after which the new team was hired.

The maritime affairs ministry and Karachi Port Trust have ordered inquiry reports on why the previous salvaging endeavours were failed wherein the shipowner was asked to furnish steps he took for the extrication.