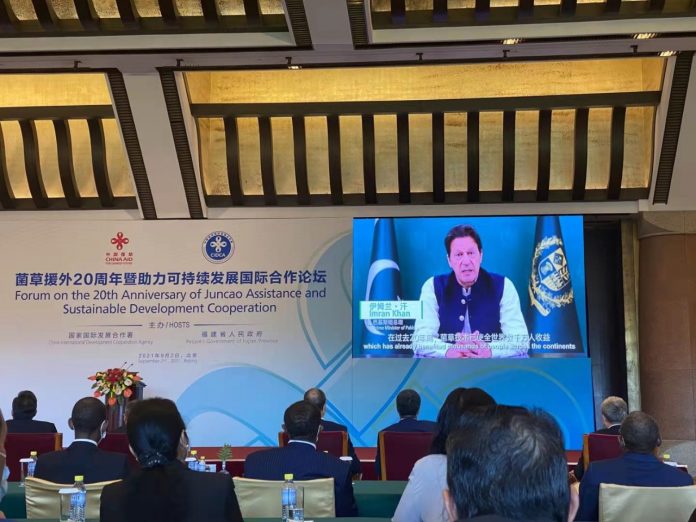 “​Such innovative, affordable and eco-friendly technologies may help catalyze our progress towards achieving the first two Sustainable Development Goals: no poverty and zero hunger,” the prime minister said In his video message screened at the Forum on the 20th Anniversary of Juncao Assistance and Sustainable Development Cooperation.

Juncao, which is famed as ‘magic grass’, is two Chinese characters meaning ‘mushroom’ and ‘grass’. The particular breed of grass was discovered by Chinese scientists to be an economical and environment-friendly substitute for timber traditionally used as a substrate for growing mushrooms.

The prime minister said ​the world at large, and the people of the Global South in particular, were grappling with multiple challenges including climate change, poverty and most of all food insecurity.

He ​congratulated China for hosting the event and Professor Lin Zhanxi for the invention of Juncao technology.

He ​also commended China for sharing the beneficial Juncao technology with over 100 countries, which had already benefited thousands of people across the continents over the past 20 years.

He mentioned that ​the technology also helped in combating desertification and could be used as food for livestock, for being protein-rich. The prime minister emphasized sustainable ways of achieving economic recovery, growth and development as critical during the pandemic.

He said ​with relentless efforts towards ending poverty in all its manifestations, extreme poverty had been steadily declining in the past two decades. Imran Khan termed ​China as a role model for developing countries in poverty alleviation. “China’s remarkable growth has brought 800 million people out of poverty over the past four decades,” he said.

He ​said the ‘Ehsaas Emergency Cash’ programme cushioned the most vulnerable part of the country’s population from the economic shocks of the Covid-19 pandemic. ​As one of the most climate-vulnerable countries, Pakistan fully supports international efforts to combat this scourge.

He said the government was progressing towards a Clean and Green Pakistan under a well-articulated climate change and environmental agenda, consisting of a number of flagship green initiatives.

On 10 Billion Tree Project, he said Pakistan’s green initiatives resonated with the United Nations Decade on Ecosystem Restoration 2021-2030. We hope it will contribute to preventing, halting, and reversing the degradation of ecosystems, he added.

The prime minister said the country’s National Poverty Graduation Programme, which empowers people by providing livelihood, creating assets and training, could play a vital role in collaboration with the Juncao technology.

He expressed his strong resolve and commitment to international cooperation aimed at poverty alleviation and sustainable growth and addressing climate change.