* A young Cambridge lady came up with the book The Accumulation of Capital, which addresses the Keynesian general theory in the long run 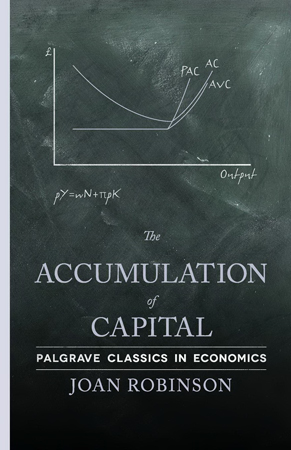 The economic analysis began with Adam Smith’s “the nature and causes of the wealth of nation”, which run the world economy for up to a 100 years.

Then Keynes’s General theory rescued economics from the infertility of the classical world. But economists were conscious of a more general theory that bring long-term changes in population, capital accumulation, and technical progress as well as relative prices and output.

A young Cambridge lady came with the book ‘The accumulation of capital’, which addressed the Keynesian General theory in the long run. Her contribution was not only a complete set of changes in relative prices and output in General theory, but her keen attention was on the overall development of the economy. Mrs. Robinson follows Keynes and Harrod.

The wide movement involving a relative shift in the output of capital goods and consumer goods or the share of wages and profits in the total product, these larger relative changes are an integral part of Mrs. Robinson growth theory and the analysis of ramification between such changes and the process of growth is one of the major contributions of her book.

Let’s come back to the Cambridge lady, which I mentioned that who was she?

Joan Morris was born in 1903 in the home of Fredrick Morris in England. She graduated from Garton College Cambridge in 1925, but she did not receive a degree because no woman received it until 1946 when the Queen’s mother received the first-ever Cambridge degree for a won. After graduation, she married one of the known Cambridge economists ‘Austin Robinson’.

In 1933, she wrote a book ‘The Economics of Imperfect competition’, in which first time she introduced the idea of elasticity of substitution and developed the analysis of the relationship between marginal cost and marginal revenue and the integrated contribution to the imperfect market is ‘Monopsony’.

Mrs. Robinson was one of the key members of the Cambridge Circus and a close fellow of the Keynes. One of her masterpieces extended Keynesianism into the long run in 1956. Under her supervision, two Nobel laureate works ‘Amartya Sen and Joseph Stiglitz’. Mrs. Robinson visited many times to China, the Soviet Union, India, and North Korea. She was nominated for the Nobel Prize in the 1970s era but for two reasons she was deprived. Firstly, she was female, and second her sympathetic view about China, and finally, she said goodbye to the rapacious world since 1983.

Joan Morris was born in 1903 in the home of Fredrick Morris in England. She graduated from Garton College Cambridge in 1925, but she did not receive a degree because no woman received it until 1946 when the Queen’s mother received the first-ever Cambridge degree for a won

This book of Mrs. Robinson is made of eight major portions with component chapters and some miscellaneous notes. The book-I is a definition and explanation of some basic concepts. This portion is not only a good introduction to Mrs. Robinson’s work but an excellent introduction to the whole general economic analysis for the beginner.

In Volume-II, ‘Accumulation in the long run, which is the heart core argument of Mrs. Robinson’s study, whither she introduced the growth model, which is later called Joan Robinson’s model of capital accumulation. This model is based on some assumptions; that the economy should be the laisse-fair closed, where capital and labour are only factors of production with fixed proportion and technical progress will be neutral. She said there are two classes in the economy worker and entrepreneur, the total national income distributed between them. Workers save nothing while entrepreneurs save but consume nothing and invest their income for capital formation. Mrs. Robinson states regarding an entrepreneur’s that; “If they have no profit the entrepreneur cannot accumulate and if they do not accumulate, they have no profit”.

Joan Robinson’s model argued that net national income is the combination of total profit and wage bill. In her model, she emphasized profit rate because profit rate depends on labour productivity, total wage rate and capital-labour ratio. Thus, the profit rate shows the following some relations.

i) If income rises and the wage rate fall then the profit rate will increase.

ii) If income rises and the wage rate becomes constant then still profit will rise.

The Golden age concept was also introduced by the iron lady in book II, whither she said that the Golden age is a period in which the economy smoothly grows uninterruptedly. She described the following two factors that determine the growth of the economy.

Therefore, this upturn in profit rate will recover equilibrium. In the second condition, when the capital growth rate is greater than the population growth rate then technological change will restore equilibrium.

In Robinson’s growth model, capital accumulation depends upon profit-wage ratio and labour productivity and gives importance to labour in technical progress, while in Harrods’ growth model, capital accumulation depends on the saving-income ratio and capital productivity and gives importance to capital in technical progress.

The onward potions from book III to VIII are supplements to book II. In book III, ‘The short period’, she states that the short period theory of fluctuations in output emphasizes the link with the long-term process of accumulation.

The portion-IV, ‘Money and Finance’ important crucks are the addition to the scarcity of technical knowledge and the insufficient urge to invest, and higher interest rates can act as another drag on the pace of accumulation.

The introduction of the rentier in Book-V brings with it consumption out of profits, with the result that profits now equal the sum of net investment and rentier expenditure and the rate of profit on capital is no longer equal to the growth ratio of the economy. But if the proportion of profits devoted to consumption remains constant, golden-age conditions can emerge and continue. Rentier consumption, however, assumes special significance under conditions of primitive stagnation, when the paucity of technical knowledge makes the emergence of a technical surplus and accumulation difficult, without depressing the living standards of workers below subsistence levels. An increase in rentier thriftiness or elimination of rentiers would then make accumulation possible provided the labour rendered surplus by the curtailment of rentier consumption can be deployed in investment activity.

The analysis of accumulation with factors of production described in volume-VI, ‘Land and Labour’ in which the general conclusion that emerges is that, if the share of rent in total output remains constant and landowners maintain a constant ratio of expenditure to rents received, then the emergence of a golden age becomes possible.

The final portions, book-VII and VIII deal with relative prices and international trade respectively. But even here, Mrs. Robinson gives a refreshing twist to familiar things. Thus, it is argued that what breaks the boom is the emergence of bottlenecks in the investment goods sector. The well-known theorem that the investment sector experiences greater proportional fluctuations than the economy is established quite neatly in terms of the fact that the share of quasi-rent in the value of sales is normally higher during the boom than on the average over the long run.

The notes on various topics at the end especially “Wicksell on Capital” and “Harrod’s Dynamics” greatly facilitate the readers to understand the concise study of Mrs. Robinsons’.

Joan Robinson wrote in the conclusion portion that the reader must draw his conclusions for himself. So, I conclude from the Mr. Harrod searching model, that model comprises of three main points, which Harrod want; The first he said that the model should be dynamic, not static, the second he argued that the model must be general not the partial and third point is that the model should prove empirically based on some principle not just only theoretical. So, these points are the main pillars of Mrs. Robinson’s work, which extended Keynesianism in the long run.

The writer is based in Islamabad and can be reached at abdulqadir_18@pide.edu.pk