To Austria, with love 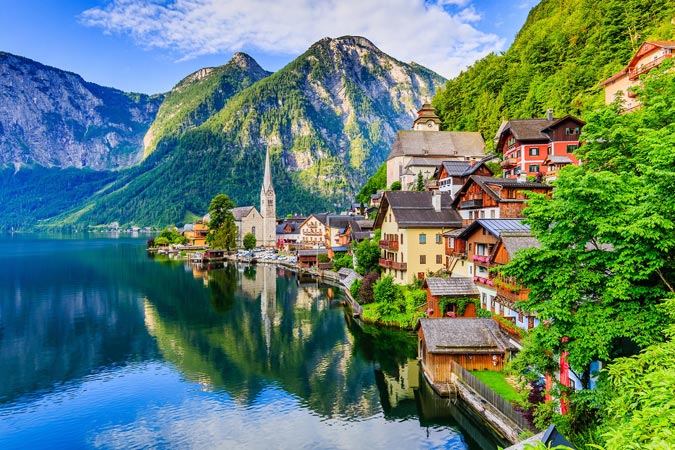 As we drove past the lush green fields and vineyards, I gasped with wonder at the serene beauty of the Alps. After all, Shahrukh Khan had wooed Kajol amidst the Alps in the Bollywood blockbuster ‘Dilwale Dulhaniya Le Jayenge’ and I was ecstatic to be amidst them.

My imagination went berserk and I could visualize Johanna Spyri’s Heidi along with her grandfather in their little cottage atop one of the precipices that we glided past. Unlike Shahurkh, Kajol and Heidi, I was not in Switzerland; I was in Austria, the land of the Habsburgs.

Historically, Austria was ethnically and linguistically diverse. The present day Austria comprises the southernmost Germanic lands. Earlier, it also included the northern Czech-speaking provinces of Bohemia and Morvavia; the German speaking Silesia inherited in 1527 and Hungary where the Magyar people spoke a non-Slavic Finno-Ugric language, also acquired in 1527, but largely lost to Turkish invasion just a few years later. However, by the end of the 17th century, the Habsburg monarchy managed to reconquer all of Hungary and the Magyar nobles surrendered their right to elect a king in 1687, to king Leopold. In the 18th century, Austria, along with the rest of the German speaking lands witnessed a revolution in the realm of arts, quite in the same manner as France and Britain underwent in the realm of ideas and material culture.

Yes, I was going to Salzburg the birthplace of Mozart, doyen of classical western music.

As the name suggests, Salzburg got its name from the salt mines in the vicinity. The panoramic view of the lake Mondsee, made me want to make the hamlets around it, my permanent abode, but I was also eager to see Salzburg, the city of festivals and we drove ahead, without stopping.

Yes, I was going to Salzburg, the birthplace of Mozart, doyen of classical western music

Salzburg is located on the River Salzer and is bewitchingly beautiful. We stopped to savour the gastronomic delights at Nordsee, a fast food joint serving sumptuous seafood, and walked down to St Peters Abbey. St. Peter Abbey is the oldest surviving Benedictine cloister in the German speaking regions. In fact, S. Peter’s district is said to be the birthplace of Salzburg. When the Romans occupied it, the city was deserted. It began to flourish with the founding of St. Peter’s by Rupert around the year 700. The monastery church was built as a Romanesque basilica between 1130 and 1143.

It was redecorated in the late baroque style in the 18th century. The interior is done in the rococo style. While both baroque and rococo buildings emphasize dynamic movement, the baroque style exudes force and passion, and rococo communicates a sense of delicacy and playfulness. The basilica witnessed Mozart’s presentation of “Mass in C minor” for the first time. Every year on the eve of the anniversary of his death, his composition the “Requiem” is performed here.

Wolfgang Amadeus Mozart, one of the sublime geniuses of Enlightenment in the 18th century, was born in Salzburg in a house at Getreidegasse, which is the historical centre of commerce. He was baptized in the Salzburg Cathedral, which is the earliest Italian style church built in the north of the Alps. The cathedral forms the core of the old town. A place of worship stood at its place during the time of Rupert, but in the 8th Century, Virgil and Arno undertook a new construction. In the 12th century, Konrad III developed it into the biggest Romanesque Minster in the German-speaking region.

As a phenomenal child prodigy, Mozart was known as the wonder child and travelled extensively. He was received by the royal families in Vienna, Paris and London and was awarded “Knight of the Golden Spurs” by the Pope. He was the darling of the Austrian Empress Maria Theresa.

The 18th century was the most fertile period of invention in the history of music, in Europe. Having no classical antiquity models to draw upon, the musicians of this age invented new musical forms. Opera was one such musical form; though it was invented by Monteverdi, the greatest contributor to this genre was Mozart. Most musicians of the later 18th Century had no inclination towards writing church music, unlike their predecessors. Mozart’s life is a classic example of the perils of struggling for a living by composing music.

His most successful years were spent at Domagasse 5, near the St Stephens Church in Vienna, the Austrian capital. Despite his frequent appalling situations, the music Mozart composed is characteristically joyous and serene. Rarely did he write in a minor key and when he did so, he usually paired a melancholic work with an exuberantly sunny one, as if to demonstrate, almost defiantly, that the travails of his personal life had no effect on his art.

Mozart never lived by convention; his wife Constanze demanded that he lead a bourgeois existence but he frequently prodded his sister Nannerl to lead a more self-indulgent life, at least “for health reasons”. His amorous life has been surrounded by mystery. Two of his most well-known love affairs were with Aloysia Weber and Nancy Storace, both highly talented singers.

As court concert director& organist, during the period 1773-1780, Mozart spent most of his time in Salzburg, except some short sojourns to Munich, Vienna and Paris. From the house of his birth at Getreidgasse, Salzburg he moved to the “Dance Master’s House” on the Makart Square, after which he left for Munich in 1781 to attend the premier of his opera “Idomeneo”. He spent the last ten years of his life in Vienna and Prague, where his most important works were performed – “Abduction from the Seraglio,” “The Marriage of Figaro”, “The little Night Music,” “Don Giovanni,” “The Magic Flute”. A Mozart Memorial was established in the house where he was born by the International Foundation Mozarteum in the year 1917. The foundation organised music festivals in memory of Mozart. The 1st Mozart festival took placed in the year 1842, when the Mozart monument was inaugurated. However, this monument on Mozart Square has little resemblance to him, according to experts. An unfinished portrait of Mozar by his brother in law, Joseph Lange is considered to resemble him the most.

However, Mozart was by no means the solitary musical genius that Austria produced. Vienna, the capital city of Austria is known as the world capital of music. It was home to so many geniuses that it is known as the “genius loci” for music. Franz Joseph Haydn composed several works here, including “The Creation” and “The Seasons”. He died during the Napoleonic occupation of Vienna at the age of 77.

When a canon ball landed in front of his house, his reaction was -“Never fear’ Haydn is here-nothing can happen”.

Haydn and Mozart were the leading representatives of the classical style of music that succeeded the Baroque style. Prior to the Classical, the Baroque was the dominant art style in Europe, in which the performing arts figured prominently. Since the exuberance of the Baroque was closely associated with the Spanish and Austrian Habsburgs, it was resisted by the French due to nationalist reasons. After all, since the French had been continually fighting the Habsburgs throughout most of the 17th and 18th centuries, it seemed inappropriate for France to admit cultural inferiority by imitating the style of its political rivals. In the 2nd half of 18th century, the style of music was called Classical as it emulated principles of order, clarity and symmetry inspired by classical antiquity. Composers of the classical school adhered to certain structural principles and their music was predominantly secular in keeping with the spirit of enlightenment. Music writing was primarily in three forms -opera, chamber music and orchestral composition.

The most fertile & popular of all classical musical forms was the symphony. In the history of music, the symphony was a new genre and may be compared to the novel in the realm of literature. Though Haydn is known as the ‘father of the symphony’, some experts on music consider that three of Mozart’s last symphonies are better known, for their grace, variety & technical perfection.

The personal circumstances of all these musical geniuses can be linked to the political & social backgrounds of their times, affecting the music they produced A deeper study of their lives and music offers the possibility of opening up fresh vistas in the study of history. For instance, Mozart’s famous musical comedy “The Marriage of Figaro” was received with a general prevalent sentiment-“What we are not allowed to say these days, we will have to SING”. Except France and Britain, Enlightenment ideas found resistance in other parts of Europe, from religious and state authorities, and thus this popular sentiment. It offers a fascinating insight into the rigidity of Anciene Regimes on the eve of the French Revolution, the influence of Enlightenment ideas on art and culture and an unflinching commitment to overcoming debacles of the old order. While many compositions of these musical geniuses were reflective of the turbulent times, others provided the much-needed euphoria that enabled to tide over values that were considered redundant in the 18th century.

The writer is an assistant professor of History at the University of Delhi, India. She teaches the History of Modern Europe and can be reached at drfatimahussain21@gmail.com